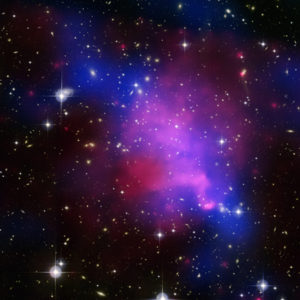 One of its paths is targeted at a better understanding of cataclysmic events such as: supernovas – the titanic explosions marking the final evolutionary stage of massive stars; mergers of multi-solar-mass black-hole or neutron-star binaries; and, most compelling of all, the violent birth and subsequent evolution of our infant Universe. This quest is pursued using the combined and often complementary power of all ‘cosmic’ messengers: cosmic rays, electromagnetic waves (i.e. ‘light’ but also photons at all energies), neutrinos and gravitational waves. Another path aims to elucidate long-standing mysteries such as the true nature of Dark Matter and Dark Energy, the intricacies of neutrinos and the occurrence (or non-occurrence) of proton decay.

The field of astroparticle physics has quickly established itself as an extremely successful endeavour. Since 2001 four Nobel Prizes (2002, 2006, 2011 and 2015) have been awarded to astroparticle physics and the recent – revolutionary – first direct detections of gravitational waves is literally opening an entirely new and exhilarating window onto our Universe. We look forward to an equally exciting and productive future.

Many of the next generation of astroparticle physics research infrastructures require substantial capital investment and, for Europe to remain competitive in this rapidly evolving global field of research both on the ground and in space, a clear, collective, resource-aware strategy is essential. As a relatively new field, European astroparticle physics does not benefit from a natural and strong inter-governmental organisation that has a remit to drive it, in the same way as CERN, ESO and ESA help to drive their areas of specialism. This is why, in 2001, European scientific agencies founded APPEC (the Astroparticle Physics European Consortium). Since 2012, APPEC became a consortium operated on the basis of a Memorandum of Understanding with the overarching aim of strengthening European astroparticle physics and the community engaged in this field.

Apart from promoting cooperation and coordination, a crucial APPEC activity is to formulate, update and realise the European astroparticle physics strategy. Building on earlier strategies released in 2008 and 2011, APPEC started a new roadmap process. The APPEC Scientific Advisory Committee (SAC) provided
valuable contributions to the scientific part of the roadmap, followed by contributions from the agencies. In April 2016 the APPEC General Assembly, in close
cooperation with the SAC, organised a very well-attended and animated two-day Town Meeting in Paris open to the entire astroparticle physics community. This provided the key ingredients that culminated in the 21 recommendations presented in the strategy document, endorsed by the astroparticle community – recommendations addressing, in addition to the scientific issues, crucial organisational aspects as well as important societal issues such as gender balance, education, public outreach and relations with industry. The APPEC General Assembly unanimously approved them at its meeting in Stockholm in November 2016. By acting coherently on these recommendations, Europe will be able to exploit fully the tantalising potential for new discoveries that is highlighted in the second part of this document.