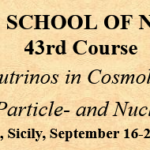 Written by katrinlink on 16th September 2022. Posted in

The Erice School of Nuclear Physics 2022 intends to present the current status of the field of neutrino physics including lectures by international experts of the various subareas as well as invited and contributed talks by the participants. The purpose of the meeting is to bring together experts and young researchers in the areas of cosmology, nuclear, particle and astro-physics in order to discuss the current status and the pertinent interrelations among these fields as well as to explore future directions, both in experiment and theory. They aim to cover a broad range of topics to elucidate synergies and identify areas of future progress. This should be especially beneficial to the younger participants of the meeting.

Neutrino physics is at the heart of a broad variety of phenomena in Cosmology, Astro-, Particle and Nuclear Physics. Their fundamental properties such as masses, hierarchies, mixing angles, CP-violating phases and the Dirac- or Majorana character are still poorly known and remain to be explored in a range of contemporary and future experiments. Neutrinos play an important role in our quests to study the early universe, the nature of dark matter and the physics of star bursts. The interaction of neutrinos with nuclei is fundamental to astrophysical processes and is a crucial element for many observational techniques. It requires a dedicated experimental effort with access to many sources of information and controlled confrontation of the results with theoretical models to unravel these phenomena and thereby allow to study the implications for nuclear physics, astrophysics and cosmology.

In detail, the following topics will be presented and discussed: