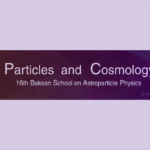 Written by katrinlink on 29th April 2019. Posted in

On the slopes of the Mt. Elbrus, the 16th International Baksan School on Astroparticle Physics was held, organized jointly by the Institute for Nuclear Research (INR) of RAS and the Joint Institute for Nuclear Research (JINR) with the participation of the Astroparticle Physics European Consortium (APPEC) and the Russian Foundation for basicResearch (RFBR). After a 15-year break, the world-famous series of schools held near the Baksan Neutrino Observatory of the INR RAS was revived.

Among the participants of the School, there were 58 postgraduates, senior students, and young scientists from 9 countries of three parts of the world. Participation of European students became possible thanks to APPEC support; many Russian listeners were supported by JINR and the INR RAS, and the RFBR grant gave an opportunity to cover the business trip expenses of invited lecturers. “At the School, I saw a well-balanced composition of the deepened theoretical basis, the modern state of science and the view on future astrophysical experiments, and all this was presented by great lecturers. A large number of fairly good questions asked by participants, and their vivid interaction confirms the great success of the School that should definitely be held again in the same format,” as quoted by Thomas Berghöfer (DESY, Germany), who also delivered the lecture “Ultimate Low Light-Level Sensor Development”.

A more comprehensive report can be found in their press release and on the webpage which also provides additional material.