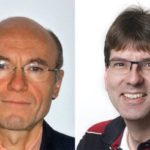 Written by katrinlink on 15th November 2016. Posted in 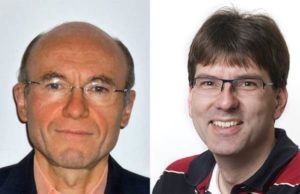 Antonio Masiero, deputy head of INFN in Italy and professor of theoretical physics at the University of Padua has been appointed by the APPEC General Assembly as the new Chair of the APPEC organisation commencing in January 2017.

At the same General Assembly Job de Kleuver, from the Dutch FOM Institute for International Affairs and Large Scale Facilities, was elected Secretary General. Both will take office on 1 January 2017, respectively succeeding Professor Frank Linde (Nikhef, Netherlands) and Thomas Berghöfer (DESY, Germany), at the end of their mandates.

Speaking of his appointment Professor Masiero said “”It is really an honour and a responsibility to be asked to lead APPEC through the next few years when we will be putting in place the key recommendations made by the forthcoming APPEC road map due to be published early in 2017. Astroparticle physics now represents an extraordinarily exciting opportunity for science to explore the uncharted land beyond the Standard Models of particle physics and cosmology”.

Current APPEC Chair Professor Linde welcomed the appointments and said “Congratulations to Antonio on being appointed APPEC Chair. You will have a busy time ahead of you with the roadmap soon to be published. I am sure you will do an excellent job as our new APPEC Chair.”

Job de Kleuver said “Astro particle physics is an exciting field of science and in recent months we have seen research breakthroughs with hopefully more on their way. The implementation of the new APPEC roadmap is an ambitious effort and I am fully motivated to take on responsibility for those plans, together with Antonio, and to strengthen the ties between the APPEC partners, leading to both the realisation of new research infrastructures and enabling European Astroparticle Physics to continue to flourish.”

Appec is the consortium that brings together European agencies that support research in Astroparticle Physics at the national level, with the primary objective to promote and facilitate cooperation within the growing community of astroparticle physicists in Europe. Astroparticle physics, that the encounter between particle physics, cosmology and Astrophysics, is a relatively recent and rapidly growing field of research. With physics experiments in the underground Labs and submarines, extensive networks of ground-based telescopes to detectors in space, Europe is gathering more and more fascinating challenges, aiming to study the elusive particles and uncover the darkest mysteries about the structure of the universe.

Job de Kleuver graduated in experimental physics in 1989. After two years of research in physics, in 1991 he moved to Research Policy Department of FOM, the Research Council in the Netherlands. He is currently responsible in charge of International Affairs and large infrastructures. For 25 years, he has been involved in scientific policy in various fields of physics, with a specific focus on large research infrastructures, such as the Dutch laboratory experiments at LHC HFML and since 2000 astroparticle physics. He is Secretary of the board of the collaboration Nikhef and a member of various committees including HFML domestic, international and European projects.