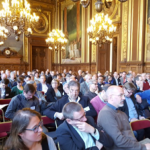 Written by katrinlink on 8th April 2016. Posted in 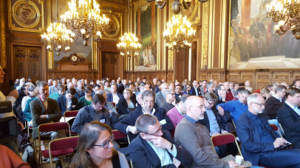 The APPEC Town Meeting held in Paris on 6 and 7 April saw the astroparticle physics community gather and share information in preparation for the new APPEC Roadmap.

The roadmap to be published this year will update its predecessors from 2011 and 2008. Speaking as the meeting began, Antonio Masiero, chair of the APPEC Scientific Advisory Committee pointed out that the observation of the Higgs boson, the Planck map of the Cosmic Microwave Background, and the recent direct detection of gravitational waves had all taken place since the last roadmap, and had offered support to the standard model. However, there are still some points of contention between the standard model and observed facts.

Read reports from the meeting in our newsletters from day one and day two.