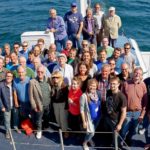 Written by katrinlink on 4th October 2016. Posted in 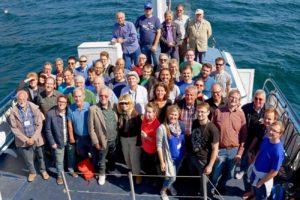 From 29 August – 3 September, 60 scientists from across the world gathered in the village of Listvyanka at the shore of Lake Baikal during The Three Messenger Conference writes Dr Vladimir Bozhilov

Somewhat contrary to your first expectations, Siberia – a tremendously vast region that accounts for 77% of the land of the Russian Federation – can be a magnificent and sunny place. At least at the shores of Lake Baikal at the end of August or in the early days of September. The 60 scientists who just a few weeks ago took part in the Three Messenger Conference at the village of Listvyanka at Lake Baikal enjoyed nice weather, and an intense amount of lectures and networking, focused on the three astroparticle messengers.

The conference from 29 August – 3 September was organized by APPEC (Astroparticle Physics European Consortium), its transnational partner JINR (Joint Institute for Nuclear Research) in Dubna, the Institute for Nuclear Research of the Russian Academy of Sciences, together with the Lomonosov State University in Moscow, and the Irkutsk State University. The meeting provided a unique opportunity for exchanging cutting-edge science ideas and for fostering collaborations between scientists from all over Europe, America, and Russia.

The name “Three Messenger” is inspired by the three basic cosmic messengers that scientists use to study the high energy Universe. Remember the discovery of gravitational waves announced in February 2016? Combined with ultra-high energy neutrinos and cosmic and gamma rays, these are the tools astroparticle physics uses to study some of the most exciting phenomena in nature. The merging of two black holes, the active hearts of distant galaxies, and the mysterious events that produce gamma ray bursts are just a few examples.

During the conference, colleagues from around the world also learned more about the history of astroparticle physics in the Baikal region. It dates back to the 1960s, as explained by Prof. Nikolay Budnev, director of the Applied Physics Institute at the Irkutsk State University. Prof. Budnev was also head of the Local Organizing Committee, which did a great job. In between all the lectures and proceedings, the participants could still have a boat ride on Lake Baikal and follow the Great Baikal Trail. After the conference, participants had the chance to make an excursion to the TAIGA experiment, a combined cosmic and gamma ray experiment currently built in the Tunka Valley. In one of the upcoming newsletters, we will describe the TAIGA experiment in greater detail. The TAIGA site visit was accompanied by a film team from Russian television.

Dr. Vladimir Bozhilov is a Chief Assistant Professor in the Dept. of Astronomy at the Faculty of Physics, University of Sofia, Bulgaria. He is also the editor-in-chief for BBC knowledge Bulgaria magazine.