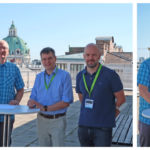 Written by katrinlink on 15th August 2022. Posted in

On 18th and 19th of July 2022 a hybrid meeting of the APPEC General Assembly took place in Vienna, Austria. At this occasion we could welcome two new APPEC members: The Austrian Academy of Sciences (ÖAW), represented in the GA by Josef Pradler and the National Academy of Sciences of Ukraine (NASU), with Fedor Danevich as new GA member. Josef Pradler and Fedor Danevich reported about current activities in astroparticle physics in their countries. Please find a summary of these reports below.

Astroparticle physics activities in Austria consist of longstanding engagements in cosmic ray physics (FERMI, CTA, H.E.S.S.) by the University of Innsbruck and more recent growing investments in the experimental and theoretical exploration of dark matter in Vienna, e.g. in the frame of the JENAA EoI iDMEU.

In particular, the Vienna Institute of High Energy Physics (HEPHY) by the Austrian Academy of Sciences is involved in the CRESST (Cryogenic Rare Event Search with Superconducting Thermometers) and COSINUS (Cryogenic Observatory for SIgnals seen in Next-generation Underground Searches) dark matter direct detection experiments. Their focus is on sub-GeV mass dark matter particles and a test of the DAMA/LIBRA signal claim, respectively. Both operate at the LNGS (Laboratori Nazionali del Gran Sasso). A comparatively smaller involvement in neutrino physics happens through the participation in the NUCLEUS experiment. HEPHY is Austria’s largest center for particle physics in Austria and the Austrian Academy of Sciences is the official signatory of the APPEC association document.

The experimental dark matter program is supplemented by various theory groups in Graz and Vienna and it includes the current and future ERC-funded efforts in stellar dynamics (ArcheoDyn), cosmology (COSMO-SIMS), and theory of particle dark matter (NLO-DM).

Austria’s major funding organisation for fundamental research is the Austrian Science Fund FWF. In addition, there is the Austrian Research an Promotion Agency (FFG) for industrial research and development in Austria. The participation in major research infrastructures such as CTA and CERN is enabled through by the Federal Ministry for Education, Science and Research. 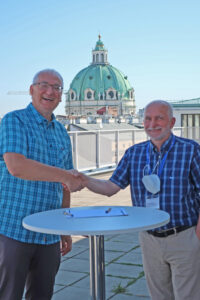 There are several groups in Ukraine working in different experimental and theoretical activities in the field of astroparticle physics.

Two groups from the Main Astronomical Observatory of the National Academy of Sciences of Ukraine (NASU) use astronomical big data to study dynamical mechanisms of accretion in galactic nuclei, stability, accretion, and tidal disruption near supermassive black holes, to analyse the matter distribution in large-scale structures, estimate virial masses in different galaxy systems, to study properties of the matter and non-zero magnetic fields in voids and search for hypothetical particles.

In 2015 several Ukrainian institutions joined the CTA Consortium. Besides, the scientists participate in the LISA, THESEUS and ATHENA projects.

Restrictions on the parameters of dark-matter-candidate particles, search for astrophysical signal of light-sterile neutrinos decays, limit on the mass of light fermionic-dark-matter particles were set by a group of the Bogolyubov Institute for Theoretical Physics of the NASU. Gravity theories, dark matter, extension of the Standard Model are subjects of the researchers from the I.I. Mechnykov National University (Odessa). Dark matter and dark energy on astrophysical and cosmological scales are the directions of activity of the group from the Ivan Franko National University of Lviv.

Experimentalists from the Taras Shevchenko National University of Kyiv participate in the Hyper-Kamiokande and DUNE collaborations.

The principal scientific goal of the Lepton Physics Department of the Institute for Nuclear Sciences of NASU (INR NASU) is search for rare or hypothetical processes in nuclear and particle physics. The group participates in the CUPID collaboration aiming at search for neutrinoless double-beta decay of 100Mo. R&Ds for the project are carried out in the framework of the CUPID-Mo, CROSS and BINGO projects. The INR NASU is also a member of the Borexino collaboration. Recently the group joined the RES-NOVA project to develop PbWO4 based bolometers for neutrino detection from astrophysical sources. A group from the Kharkiv Institute of Physics and Technology of NASU carried out a deep purification of the archaeological lead samples, while the PbWO4 crystal scintillators were grown by the Institute of Scintillation Materials of NASU.

Participation in APPEC will be definitely the very suitable and reliable basis for Ukrainian scientists to participate in the research in the field in Europe.