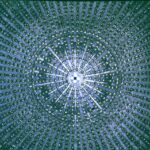 Written by katrinlink on 8th July 2020. Posted in

At the recent Neutrino 2020 virtual meeting the Borexino Collaboration has announced the first detection ever of neutrinos from the CNO cycle in the Sun, an astounding experimental achievement, which closes a chapter of physics commenced in the years ‘30s of the past century.
It was indeed in 1938 when Bethe and von Weizsäcker independently proposed that hydrogen fusion in the Sun might be catalyzed by the heavy nuclei carbon, nitrogen, and oxygen, according to a cyclic sequence of nuclear reactions. This second mechanism of hydrogen burning into helium in the Sun’s core complements the main energy generating process constituted by the pp chain of reactions, initiated by the direct fusion of two protons into a deuteron.
Despite the indirect evidences from astronomical and astrophysical observations that the two hypothesized engines powering the Sun and the stars are actually occurring, a direct experimental confirmation can come only by detecting the neutrinos, which are copiously produced by several reactions in both sequences.
This consideration was at the heart of the foundation of the Solar Neutrino experimental program since the middle of the 20th century, by far one of the most successful areas of particle physics over the past six decades, which amassed results of enormous relevance and implications, the latest being the recent Borexino announcement.
From the first Solar Neutrino detection by the Homestake experiment in the 70’s, to the Gallex and Sage capture of the main pp neutrinos in the 90’s, to the present Borexino observation of the CNO cycle neutrinos, through these three milestones physicists have completely unraveled the two processes powering the Sun and the stars. We now have the final, definite and complete experimental answer to the centuries-old question of humankind on how the Sun shines. 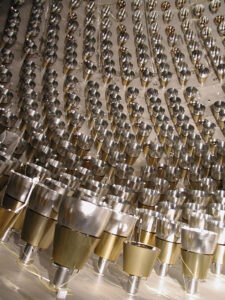 Following the initial intuition of the founders of the field, comprising true giant of physics like Pontecorvo and Alvarez, Solar Neutrinos proved to be an invaluable tool to study the operating mechanism of the Sun, being a direct probe of the otherwise inaccessible nuclear furnace at its core.
Moreover, throughout this several decade long fascinating enterprise to unveil the mysteries of the Sun, Solar Neutrinos were also pivotal to assess the neutrino oscillation phenomenon, indisputably one the greatest particle physics discovery at the dawn of the new millennium.
Borexino therefore, with its CNO discovery, represents the crowning of a physics field rich of multiple and somehow unexpected successes.
From the measurement side, the detection of CNO neutrinos was not easy at all, on the contrary, it was a true daunting task.
In general, Solar Neutrinos can be caught only with highly sensitive detectors, capable of suppressing most sources of background signals. To achieve the required sensitivity, the Borexino experiment was built with an onion-like design, characterized by layers of increasing radiopurity while moving from the periphery to the center.
The transparent, spherical core is filled with 280 tons of liquid scintillator (a material that emits light when a neutrino interacts with the electrons within it), which is encased in a large, stainless-steel sphere filled with a buffer liquid and equipped with 2200 light sensors. The outer sphere is contained within an even larger stainless-steel tank filled with 2400 tons of ultrapure water. The entire detector is located 1 kilometer underground, in the Gran Sasso Laboratory.
The liquid scintillator has attained unprecedented radiopurity levels by means of a series of special precautions and dedicated purifications, which the Collaboration adopted in an undeterred effort for the ultimate lowest background.
Borexino has been taking data since 2007. The Collaboration marked already important achievements in 2007 with the detection of the Solar Neutrinos from the Berillium-7 electron capture, and in 2014 when it announced the first real-time detection of neutrinos from the proton-proton fusion (in contrast with the previous detection, time and energy integrated, from Gallex and Sage). 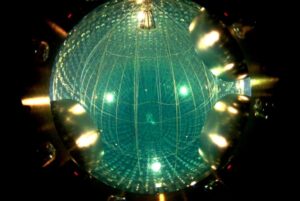 Inside view of the Borexino detector. Credits: Borexino

Despite these outstanding successes and an already ultrapure detector, Borexino physicists had to push very hard to further improve the suppression and understanding of the tiny residual background to succeed in identifying the CNO cycle neutrinos. The key issue was the decay of the isotope Bismuth-210, whose energy spectrum is located exactly in the same energy window where the CNO signal is expected to occur. The measurement of the Bismuth-210 decay rate was achieved by studying the decay rate of Polonium-210, a process that is in equilibrium with Bismuth-210 decay, but easier to measure.
Therefore, the quest for CNO neutrinos turned into the quest for Bismuth-210 through Polonium-210.
However, since the decay rate of Polonium-210 is highly sensitive to fluctuations in temperature, which trigger convection of the liquid and induce the transport to the center of the detector of Polonium-210 originated on the surface of the scintillator containment vessel, the Collaboration needed to carefully stabilize thermally the whole set-up.
To this purpose, Borexino was wrapped with an insulation layer to decouple it from the external temperature variations, and an active control system was installed to establish internally across the scintillator a stable top-bottom gradient, which is key to help maintaining the liquid in a static condition. Furthermore, the detector was equipped with a large number of temperature sensors for high precision monitoring of the temperature evolution in multiple locations, and a sophisticated fluid dynamic simulation was implemented to predict the behaviour of the scintillator under varying external conditions.
As ultimate precaution, the air of the Hall C of the Gran Sasso Laboratory where Borexino is located, has been also stabilized by means of a feedback control loop.
When all these tools enabled finally the long-sought determination of the intrinsic Polonium-210, and hence Bismuth-210, content of the scintillator, the CNO signal emerged unmistakably in the global fit of the data with a significance as high as 5 sigma.

The CNO detection announced by Borexino (which following the scientific practice will be deemed official after been peer reviewed) is, hence, the successful outcome of a relentless, years-long effort, to stabilize and understand the detector, which implied to push the liquid scintillation technology beyond any limit previously attained.
Besides representing the final assessment of the global theoretical picture of how the Sun and the stars operate, CNO neutrinos attract the specific interest of Solar physicists because they provide a path toward the direct determination of the Sun’s metallicity, i.e. the content of elements heavier than hydrogen and helium. In particular, by studying the rate of CNO neutrinos it is in principle possible to shed light on the long-standing puzzle whether the Sun’s metallicity is more in line with models predicting a higher metallic content, or with models implying a lower content evaluation.
Although the inherent uncertainty of the Borexino result makes it consistent with both scenarios, the Borexino approach and outcome pave the way for future measurements from next generation experiments, which could further address the solar composition conundrum.
Beyond this, Borexino, which is approaching the conclusion of its lifetime, leaves to the neutrino field the persisting legacy of the first observation of CNO neutrinos, a breakthrough result obtained through an impressive experimental effort, which will remain for the future as one of the foundational achievements of neutrino physics.

Gioacchino Ranucci for the Borexino Collaboration