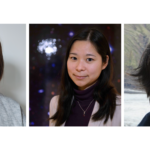 Written by katrinlink on 17th February 2021. Posted in

Interview with Clarisse Aujoux, Kumiko Kotera and Odile Blanchard on the first carbon footprint study of an astroparticle physics experiment

Environmental sustainability is becoming an increasingly important topic, especially in science. The approach of determining the annual carbon footprint of a future astroparticle experiment and identifying possible savings potential is new and will certainly become an important aspect in the future.  As pioneers, three scientists have published a study on the carbon footprint of the GRAND experiment, taking a close look at the main emission sources, i.e. travel, digital technologies and hardware equipment. In this interview, we talk to Clarisse Aujoux, Kumiko Kotera and Odile Blanchard about their study.

With your work, you are the first to conduct such a carbon footprint study for an astrophysics experiment. How did it come about?

The GRAND collaboration is concerned about its environmental impact. We had several discussions about this subject in collaboration meetings, and a “GRAND Carbon Committee” was set up. As our experiment is in its prototyping stage, it is a good time to make decisions according to environmental criteria. Still, as long as we don’t have any quantification of the emissions, we cannot make consistent decisions. Therefore, a first step towards taking such measures was to estimate the carbon footprint of our experiment, and assess the major sources of emissions.

Can you shortly explain what GRAND is? 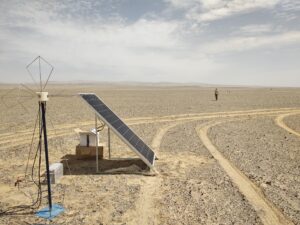 A prototype antenna being tested at the deployment site of the 300-antenna pathfinder, GRANDProto300, in the Qinhai Province, China. Credit: GRAND collaboration.

The working of the most violent phenomena in the Universe (compact object mergers, blazar jets, pulsar winds…) remains mysterious. These objects could be probed by deciphering the ultra-high energy astroparticle messengers that they send. The detection of these particles is however very challenging and requires to deploy large-scale experiments.

The GRAND (Giant Radio Array for Neutrino Detection) project aims primarily at detecting ultra-high energy neutrinos, cosmic rays and gamma rays, with a colossal array of 200,000 radio antennas over 200,000 km2, split into ~20 sub-arrays of ~10,000 km2 deployed worldwide. The strategy of GRAND is to detect air showers above 1017 eV that are induced by the interaction of high-energy particles in the atmosphere or in the Earth crust, through its associated coherent radio-emission in the 50-200 MHz range.

A staged construction plan ensures that key techniques are progressively validated, while simultaneously achieving important science goals in UHECR physics, radioastronomy, and cosmology early during construction. The 300-antenna pathfinder array, GRANDProto300, is planned to be deployed in 2021. It aims at demonstrating autonomous radio detection of inclined air-showers, and make measurements of the composition and the muon content of cosmic rays around the ankle energy. The first 10,000 antenna sub-array (GRAND10k) is planned to be deployed in the mid 2020s, and will have the sensitivity to detect the first ultra-high energy neutrinos. In its final configuration (GRAND200k), in the 2030s, GRAND plans to increase our sensitivity to neutrino detection of two orders of magnitude compared to current experiments, and to reach a sub-degree angular resolution, which should enable us to perform ultra-high energy neutrino astronomy.

GRAND will also be the largest detector of UHE cosmic rays and gamma rays. It will improve UHECR statistics at the highest energies ten-fold within a few years, and either discover UHE gamma rays or improve their limits ten-fold. Further, it will be a valuable tool in radioastronomy and cosmology, allowing for the discovery and follow-up of large numbers of radio transients — fast radio bursts, giant radio pulses — and for precise studies of the epoch of reionization.

Which parts of the experiment cause the greatest greenhouse gas (GHG) emissions?

Projected distribution of greenhouse gas emissions for all sources for GRANDProto300, GRAND10k and the full GRAND array. The title indicates the total amount of emissions per year due to each source at each experimental stage. (source: Aujoux, Kotera & Blanchard, 2021 https://arxiv.org/pdf/2101.02049.pdf)

In our study, we have focussed on the GHG emissions related to three sources: travel, digital technologies and hardware equipment. Interestingly, we find that these emission sources have a different impact depending on the stages of the experiment. Digital technologies and travel prevail for the small-scale prototyping phase (GRANDProto300), whereas hardware equipment (material production and transportation) and data transfer/storage largely outweigh the other emission sources in the large-scale phase (GRAND200k). In the mid-scale phase (GRAND10k), the three sources contribute equally.

Did you expect these results or was one result particularly surprising?

We did not expect that the emissions related to digital technologies would have such a large impact. We believe that people in general are more aware of the emissions due to travel and hardware equipment production, but tend to forget that large amount of data can actually lead to a huge carbon footprint.

How can these findings contribute to reducing GRAND’s carbon footprint?

The study has initiated numerous discussions within the collaboration. Various types of actions may be implemented to mitigate the carbon footprint of GRAND, at all stages of the project deployment.

Travel emissions may be reduced by encouraging local collaborators to perform the on-site missions or by having international collaborators stay longer on the site of the experiment rather than doing multiple trips, each lasting a few days ; they may also be reduced by optimizing collaboration meetings, through optimizing the location of the meetings, limiting the number of attendees from the collaboration, opting for some virtual meetings, and combining virtual and physical meetings.

Options to reduce digital emissions include the reduction in the volume of data to be archived. The collaboration is already developing data reduction strategies to reduce the carbon footprint of data transfer and storage by 4 or 5 orders of magnitude. It was also found that shipping regularly the archival data by air mail would be largely less emitting than transferring the data via the internet. As for the emissions from simulations and data analysis, the challenge is to reduce the millions of CPU hours projected to be spent yearly. Incentives to weigh the cost/benefit of the simulation runs may contribute to lower the carbon footprint in the years to come.

Mitigating the emissions from manufacturing and hauling the hardware equipment will be a top priority for the design of the GRAND200k phase, as these emissions are projected to weigh most in the carbon footprint of this phase. It is about optimizing the environmental cost of the materials used for the antennas, the solar panels and the batteries, establishing a recycling plan, and monitoring the transportation from the production sites to the array-sites.

The GRAND collaboration will take several actions in response to this study. The various action plans proposed for each emission source will be documented in a GRAND Green Policy, which each collaboration member will be encouraged to follow, in order to reduce the collective carbon footprint.

To what extent does the location of the experiment, in this case China, have an impact on the results?

The GRAND experiment requires to be deployed in a radio-quiet area, and such areas are remote by essence. The emissions related to on-site missions and the transportation of the hardware equipment have a large impact on the total carbon footprint, in the small- and mid-scale phases.

As an international collaboration, GRAND members  originate from institutes located in several countries. The main countries presently involved are (in alphabetical order): Brazil, China, France, Germany, the Netherlands, and the United States. This geographical spread, not specific to GRAND but to any international collaboration, raises obvious concerns about communication (e.g., physically gathering collaborators regularly, and hence about travel, but also about the digital infrastructure).

However, in the large-scale phase, travel and hardware transportation appear to have less impact, as emissions due to digital and hardware material prevail. We caution however that the geographical locations of the various sub-arrays –to be scattered around the world at yet undecided locations– was not taken into account.

Roadmap of the GRAND project. The different stages of the project are presented, with information on the envisionned set-up, growth of the collaboration, and major greenhouse gas emission sources with their contribution in tCO2e/yr and their corresponding percentage, as estimated in our work. (source: Aujoux, Kotera & Blanchard, 2021 https://arxiv.org/pdf/2101.02049.pdf)

Particularly through the COVID-19 pandemic, the topic of travel has been discussed a lot, especially in connection with online meetings. How has this pandemic influenced your findings?

While studying the travel habits of the GRAND collaboration members, we clearly saw a drop in their travel activity after March 2020. This obviously resulted in a cut in the GHG emissions due to travel. Our study indicates that travel constitutes one of the main emission sources of the small- and mid-scale stages of the project. Besides, it is our belief that mitigation measures should be taken on all possible fronts. The Covid-19 situation has demonstrated that cutting on travel is definitely a way to reduce the carbon footprint of the collaboration.

However, we will have to elaborate on hybrid solutions as we need to maintain a certain level of physical meetings. It will be about optimizing those meetings and trips. In any case, researchers need to travel to the experimental site in order to make measurements, check that the site is appropriate for the project, and deploy the array. Furthermore, in the process of building a collaboration, personal interactions and conversations at coffee breaks and shared lunches and dinners are viewed as crucial seeds for progress. For students and postdoctoral scholars, networking is often perceived as a sine qua non for a successful career, and this is more challenging to perform online.

Do you think that such studies will be part of every experiment in the future?

Large-scale physics and astrophysics experiments gather a large fraction of the scientific staff and absorb a significant volume of the science budget. As such, it seems essential to assess their environmental impact. Besides, we believe that these experiments could turn out to be interesting for other laboratories to elaborate and test ideas, and to appreciate the best practices to be implemented in other contexts.

In this token, it is likely that such studies become part of every experiment in the future, primarily because scientists feel in majority concerned about these questions.

What can other experiments learn from your study?

The specificity of the methodology presented in our paper is that it is fully transparent and uses open source data. Hence, the method is replicable to any other scientific consortium. We have already received feedback and solicitation from colleagues who are planning to use our methodology to assess the carbon footprint of their experiments. We also propose several lines of actions for the travel and digital emission sources, that could be implemented in other experiments. We are looking forward to exchanging ideas, data and methods in order to improve the carbon footprint of the physics and astrophysics community. 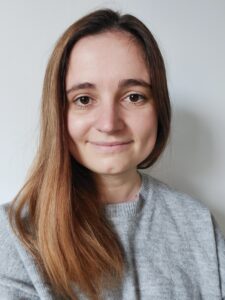 Clarisse Aujoux is currently completing her Master’s degree at Ecole des Ponts et Chaussées Paris Tech, with a major in energy transition. Through her student years, she progressively developed a strong interest for environmental impact of human activities and thus specialized in carbon footprint and Life Cycle Assessment. Joining the GRAND project in 2020 for a 6 months period, she provided a systemic approach to the environmental footprint of this collaboration, essential for the decision-making process. 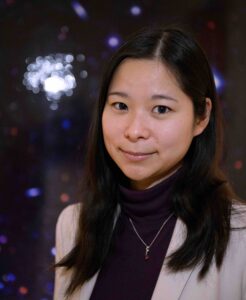 Kumiko Kotera is a researcher at the Institut d’Astrophysique de Paris of the French Centre National de la Recherche Scientifique (CNRS). She specializes in astroparticle physics and high-energy astrophysics. Today, she acts as co-spokesperson for the international GRAND project, to try to probe the most violent phenomena of the Universe, via the detection of their extremely energetic messengers (cosmic rays, gamma rays and neutrinos). 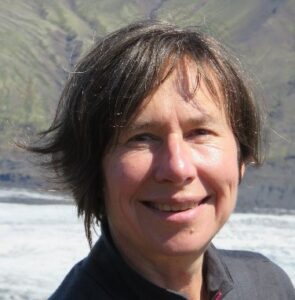 Odile Blanchard is an associate professor of economics at Université Grenoble Alpes, France, and specializes in energy and climate economics. She currently facilitates the work of the “Carbon footprint” team of Labos 1point5 and contributes to the development of GES1point5, the carbon footprint calculator of French research laboratories. : https://labos1point5.org/ges-1point5