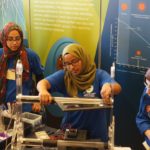 Written by katrinlink on 8th March 2018. Posted in

Women in research have changed the world. From the advent of computer programming to the discovery of dark matter, female researchers have shaped the course of history.

During Women’s History Month and to mark International Women’s Day (8 March) APPEC will highlight the achievements of some of the female researchers past and present who have inspired us.

APPEC is fully committed to promoting an inclusive, gender-neutral working environment. Historically physics is a field with low representation of female researchers, especially in leading positions. Despite prominent role models, women still remain underrepresented in our field of research.

Inspired by the H2020 project GENERA, APPEC will develop a gender balance policy for all its activities and will urge projects to develop and implement Gender Equality Plans.

Science is at its best when it is inclusive and draws from the widest possible pool of talent, because when great minds are allowed to prosper, we all benefit.

Women in STEM are making history – here are just some of the inspiring women working in our field of astroparticle physics in Europe who are doing incredible work: 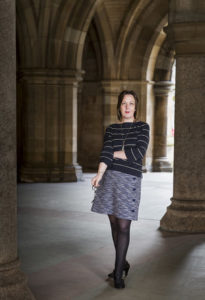 Chief Scientific Adviser for Scotland and Director of the Institute for Gravitational Research, University of Glasgow, UK
“Making progress in science means being able to work at the edge of what’s possible – that’s a thrilling place to be.”

Sheila’s research is targeted at developing optical materials for use in gravitational wave detectors. Her recent work has been a crucial part of the Advanced LIGO upgrades, carried out between 2010 and 2015, that contributed to one of the most significant scientific breakthroughs of this century: the first detection of gravitational waves announced in February 2016.

What inspired you to go into physics?
From a young age – about 10 years old – I wanted to be a physicist. I was very interested in questions that I think young people often ask, (some of which still puzzle scientists now): If I set off in a spaceship how far could I go? What’s out there in our Universe? Where did the ‘stuff’ of our Universe come from? I couldn’t think of anything more interesting than being able to try to work on our answering those questions. I’ve been lucky enough to be able to do that.

What is your advice to young women considering their career choices?
The same advice actually that my mother consistently gave to me – you can do anything you want if you set your mind to it. I would add that I think it is important to choose to do what you think is the right thing for you. People will give you lots of advice. Listen carefully to everyone, then make your own choices as to what you think is right.

What are your hopes for the field?
That gravitational astrophysics changes and widens our understanding of the Universe beyond what we can imagine now. Often in astronomy, when a new kind telescope has been created, it has found really unexpected new phenomena. I believe the same will be true of gravitational wave astronomy – I’m sure nature has some surprises for us still to come. 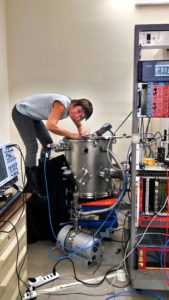 Italian National Institute for Nuclear Physics (INFN) associate and Assistant Professor at the Gran Sasso Science Institute (GSSI)
“Questioning everything rather than blindly believing in what you’ve been told: this is why being a scientist investigating the fundamental questions of humanity is the most exciting job in the world for me.”

Elisabetta Baracchini, Italian National Institute for Nuclear Physics (INFN) associate and Assistant Professor at the Gran Sasso Science Institute (GSSI), is leading an innovative project for a Dark Matter detector to be possibly hosted at INFN Gran Sasso National Laboratories. The Marie Curie Individual Fellowship she received in 2015 for an original time projection chamber prototype has in fact evolved today into a real experiment and collaboration. Elisabetta believes that a change in people mindset and perception of what being different means is needed to fight gender and any other discrimination.

Tell us about yourself
I started my scientific career as a PhD student on BaBar, one of the most advanced particle physics experiments studying CP violation. I then moved to Switzerland where I worked for 7 years as a researcher for US and Japanese Universities on MEG, a high precision experiment looking for physics beyond the Standard Model. Thanks to these varied and complementary experiences, in 2015 I was awarded a Marie Curie Individual Fellowship for an original proposal for a Dark Matter detector prototype, allowing me to return to Italy and INFN. Since then I have managed to gather a small research team for my project and I am now proposing an innovative directional Dark Matter experiment to be hosted at Laboratori Nazionali del Gran Sasso.  Since January 2018 I am also Assistant Professor at the Gran Sasso Science Institute, one of the best places to carry on my project and develop new ones.

What does it mean to be a researcher?
In my opinion, being a scientist is the most exciting and entertaining profession in the world: investigating the most fundamental questions of humanity while questioning everything rather than blindly believing in what has been told to you is priceless.

Join APPEC today and throughout the month of March on here and Twitter and meet more of the inspiring women doing incredible work in our field.