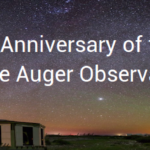 Celebration of the first 20 years of the Pierre Auger Observatory

Written by katrinlink on 9th December 2019. Posted in

The participants of the celebration lined up in front of the main building of the observatory for a group picture (photo: Miguel Martin).

Cosmic-rays are charged particles constantly bombarding the Earth and are one of the cosmic messengers that help us understand our Universe. At the highest energies, they are not much deflected by the Galactic and extragalactic magnetic fields, opening up the possibility of a new window in astronomy, the observation of the near-by Universe with charged-particles. The goal of the Pierre Auger Observatory is to study the nature and origin of those ultra-high energy cosmic rays, whose energy exceeds more than 100,000 times the energy that can be achieved in man-made accelerators.

The Pierre Auger Observatory was conceived by Jim Cronin, Alan Watson and other scientists in 1991 to address the mysteries of the origin and nature of the highest-energy cosmic rays. It was clear to them that only a very large detector would reach the exposure to collect enough events to answer the questions raised by a century of earlier experiments. The Observatory design employs a „hybrid“ detector system consisting of a 3000 km2 array of 1660 particle detectors overlooked by 27 optical telescopes. These complementary detector techniques record both the particles and the faint fluorescence light resulting from the gigantic particle cascade initiated in the atmosphere by these mysterious cosmic rays. Soon after the foundation in 1999, construction of the Observatory started and was completed in 2008.

Scientists of the 90 participating institutes and groups, as well as representatives of all 17 member states of the international collaboration met in Malargüe, Argentina in mid-November to celebrate the 20th anniversary of the experiment as well as the scientific results achieved so far. A scientific symposium opened the festivities and highlighted the state of research. On the second day, the participants visited the detectors of the Observatory in the Argentine Pampa. Many of the scientists and guests participated also in the parade for the anniversary of the city of Malargüe.  The meeting continued with a ceremonial act at the campus of the Observatory. Venerable members of the collaboration as well as representatives of funding agencies and local politicians addressed the audience and congratulated the collaboration not only on the scientific successes, but also on the social relevance and impact of the project in the province of Mendoza. One highlight of the ceremony was the conferral of the status “Honorable Senator” to the Pierre Auger Observatory by the Senate of Argentina. After unveiling a sculpture by Juan Pezzani symbolizing the role of the Pierre Auger Observatory in Argentina, the meeting concluded with a dinner banquet with typical Argentine barbecue and wine.

Spurred by the science results obtained so far, the Observatory is currently undergoing an upgrade („AugerPrime“), mostly aimed at improving the sensitivity of the observatory to the particle type and mass of ultra-high energy cosmic rays. This is done by installing new electronics, and additional and complementary detectors, allowing for a better separation of the type of the incoming particle on an event-by-event basis. The added observables are critical to select the subset of particle cascades that were produced most likely by lighter primary cosmic rays, which in turn may hold the key to identifying and studying the cosmic accelerators outside our own galaxy. More generally, the data collected with AugerPrime will also be used to explore fundamental particle physics at energies beyond those accessible at terrestrial accelerators, and perhaps yield the observation of new physics phenomena.