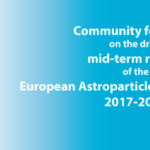 Written by katrinlink on 18th November 2021. Posted in

The European Astroparticle Physics Strategy 2017-2026 was adopted by the APPEC General Assembly in 2016. Since then, there have been many developments both in the Astroparticle Physics research field and in the wider world.
In the coming time, APPEC undertakes a mid-term update of the European Astroparticle Physics Strategy, with the aim to establish such an update in fall 2022.
The (European) Astroparticle Physics Community will be closely involved in this update. To this end, a Town Meeting is being prepared for 9 and 10 June 2022 in Berlin, at which occasion all relevant aspects of the strategy will be discussed.
In preparation of this discussion, the APPEC Scientific Advisory Committee (SAC) is preparing a mid-term strategy review document to be serving as framework for the organisation of the Town Meeting and to serve as input for the discussions themselves.

A first draft of the mid-term review is now available here. This document is a DRAFT and not the final document. It serves for the APPEC SAC to receive feedback from the community concerning the accurateness and completeness of the document. Please note, that developments are going fast and that some notions in the report may have been outdated before the ink dried up.
We invite you to give feedback to this document through a form provided on this page. There the form is accessible through the “Feedback” button on the left, or the “Fill out the survey” link at the bottom of the page. Feedback can be given as National Community, Collboration or Individual. Please check the appropriate box.
Feedback can only be provided as plain text. Of course, hyperlinks can be quoted in this text to properly document your response. Multiple feedback submissions are possible, but one comprehensive feedback text will be appreciated.
We explicitly solicit to suggest a burning question that is not yet addressed in the draft mid-term review and that you think should really be discussed during the Town Meeting.
Deadline for your feedback is Friday 21 January 2022.

Your feedback will be used to compile the final APPEC SAC mid-term strategy report that will be released well in time for the Town Meeting on 9-10 June 2022. For transparency, your feedback will become available publicly after when the final SAC mid-term review will be submitted to the community as input for the Town Meeting.
The input from the Town Meeting will serve as input for the Strategy Update document that the APPEC SAC will prepare for submission to the APPEC GA after the 2022 summer holidays. The GA will then release it as the European Astroparticle Physics Strategy 2022-2026 Update.
The European Astroparticle Physics Strategy 2022-2026 Update will also serve as an input to the process to establish the new European Astroparticle Physics Strategy after 2026.