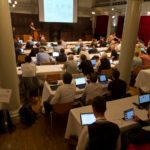 Written by katrinlink on 24th October 2018. Posted in

The depth and breadth of the science case for 3G gravitational wave observatories was presented, including the impact on the broad scientific community as a result of the important contributions that 3G can make to fields, ranging from fundamental physics, astrophysics, astronomy, cosmology and cosmography, through to nuclear science. Examples included the capability of detecting gravitational waves from all coalescing binaries in the Universe; the importance of new and independent access to the history of the equation of state parameter of Dark Energy to cosmology; the capability for precision tests of gravity under extreme circumstances; and access to the Dark Ages and perhaps signals of the early universe.

A global strategy was discussed, where every new phase must be associated with a new scientific target. Realising design sensitivities and proceeding towards the foreseen A+ and AdV+ upgrades of LIGO and Virgo, respectively will allow the gravitational wave community to produce increasingly better data on merging black holes and/or neutron stars. This provides access to important observables as the equation of state of neutron stars, allows precision tests of theories of gravity such as General Relativity, and will enable mapping the cosmology of the local universe. At the same time these upgrades de-risk the key technology for 3G. The next step will be to realise Einstein Telescope (ET): as long as there is no certainty of other 3G instruments, ET will be the best way forward as it will, for the first time, provide access to the entire universe in gravitational waves. Cosmic Explorer and a third 3G detector in Asia or Australia will provide the best complement to multi-messenger astronomy.

In the journey towards 3G science on a global scale it is important to consider the viewpoint of different continents and countries. For the Einstein Telescope the scientists closely work with APPEC to prepare the submission of a proposal to ESFRI. The results from the past three years have firmly established gravitational-waves as a cornerstone of astronomy. Excitement from scientists and the general public world-wide as well as the Nobel Prize in Physics in 2017 has further fuelled the exploration of the next generation of terrestrial gravitational detectors; the third generation.

Dawn IV was a fruitful event that provided a platform for important strategic discussions amongst the global gravitational-wave community about how to build the most scientifically advanced and successful future detector network possible.