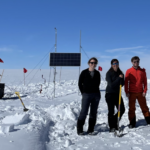 Written by katrinlink on 16th July 2021. Posted in

After a one-year delay due to COVID-19 the first radio stations ofthe Radio Neutrino Observatory Greenland (RNO-G) have been deployed in the ice of Greenland near Summit Station.
RNO-G will target neutrinos above 10 PeV, searching for a continuation of the astrophysical neutrino flux as detected by IceCube and potentially discover cosmogenic neutrino at EeV energies.

The deployment team on site in Greenland near Summit Station. Credits: RNO-G

RNO-G builds on long-term experience of radio pathfinders such as RICE, ANITA, ARA and ARIANNA that search for neutrinos in the Antarctic Ice. RNO-G combines the sensitive surface log-periodic dipole antennas as used for ARIANNA, with a combination of deep antennas and a low-noise phased array trigger as featured in ARA. The design of RNO-G also serves as a reference design for the proposed radio neutrino array of IceCube-Gen2.

Prior investigations by collaboration members showed that the ice at Summit Station shows the correct properties for a sensitive radio array. RNO-G is the first ultra-high energy neutrino detector with a view of the Northern sky and the first in Europe. The field will be complementary to any current or future radio detector at South Pole, which is particularly interesting for the potential follow-up of transient sources. Furthermore, the RNO-G field of view coincides with the most sensitive field of view of the optical IceCube detector, enabling the study of Northern sources over an extended range of neutrino energies. 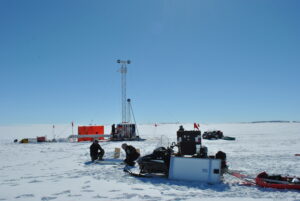 Background shows the novel BigRAID drill, the foreground the setting up of solar panels for the first station. Credit: RNO-G

Also in the view of the global pandemic, the location in Greenland has proven advantageous. While travel and logistics through New Zealand has been limited and heavily restricted, the government of Greenland never completely closed the country for travel during the summer season. Albeit following a strict quarantining policy, a team of in total 14 people (in varying shifts) could travel to Summit this year, Europeans traveling directly to Kangerlussuaq via commercial airlines. The last team members will return home at the end of August. 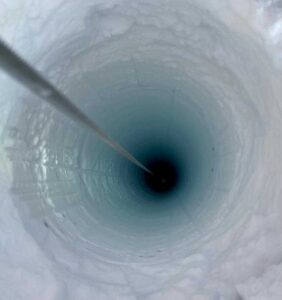 Drilling hole with a diameter of 28 cm that goes down to 100 meters. Credits: RNO-G

The work during this first deployment season will concentrate on drilling the first holes to 100 meters depth using the novel BigRAID drill as constructed by colleagues from the British Antartic Survey (BAS) specifically for this project. The drill delivers dry holes with a diameter of 28 cm down to 100 meters in less than 2 day shifts, and is relatively lightweight and can easily be operated by two people, with further plans for automation.
Next to the first radio stations, the crew installed server infrastructure and a custom LTE network for data transfer at Summit Station. With a summer population of less than 35 people, the infrastructure at Summit Station is much smaller than what one may extrapolate from the experience at South Pole Station. This constraint requires the radio stations to be fully autonomous, exclusively powered with renewable energies. While in this season only solar panels have been installed, meaning that the radio detector will go dormant during the winter, the collaboration expects to be able to add wind-turbines in one of the following seasons in order to retain full operation all year round.

As deployment is still on-going the final number of stations deployed in this season is still counting up. Two more deployment seasons are planned and ultimately, RNO-G is expected to consist of 35 stations, reaching the highest yearly sensitivity of any neutrino detector at 1 EeV.

RNO-G is funded mainly through Belgian (FWO) and German agencies (Helmholtz W2/W3 initiative DFG), and contributions from US partners, including project and logistics support by the National Science Foundation.

Anna Nelles for the RNO-G collaboration