DESI Opens Its 5,000 Eyes to Capture the Colors of the Cosmos

Written by katrinlink on 17th December 2019. Posted in

A new instrument mounted atop a telescope in Arizona has aimed its robotic array of 5,000 fiber-optic “eyes” at the night sky to capture the first images showing its unique view of galaxy light. 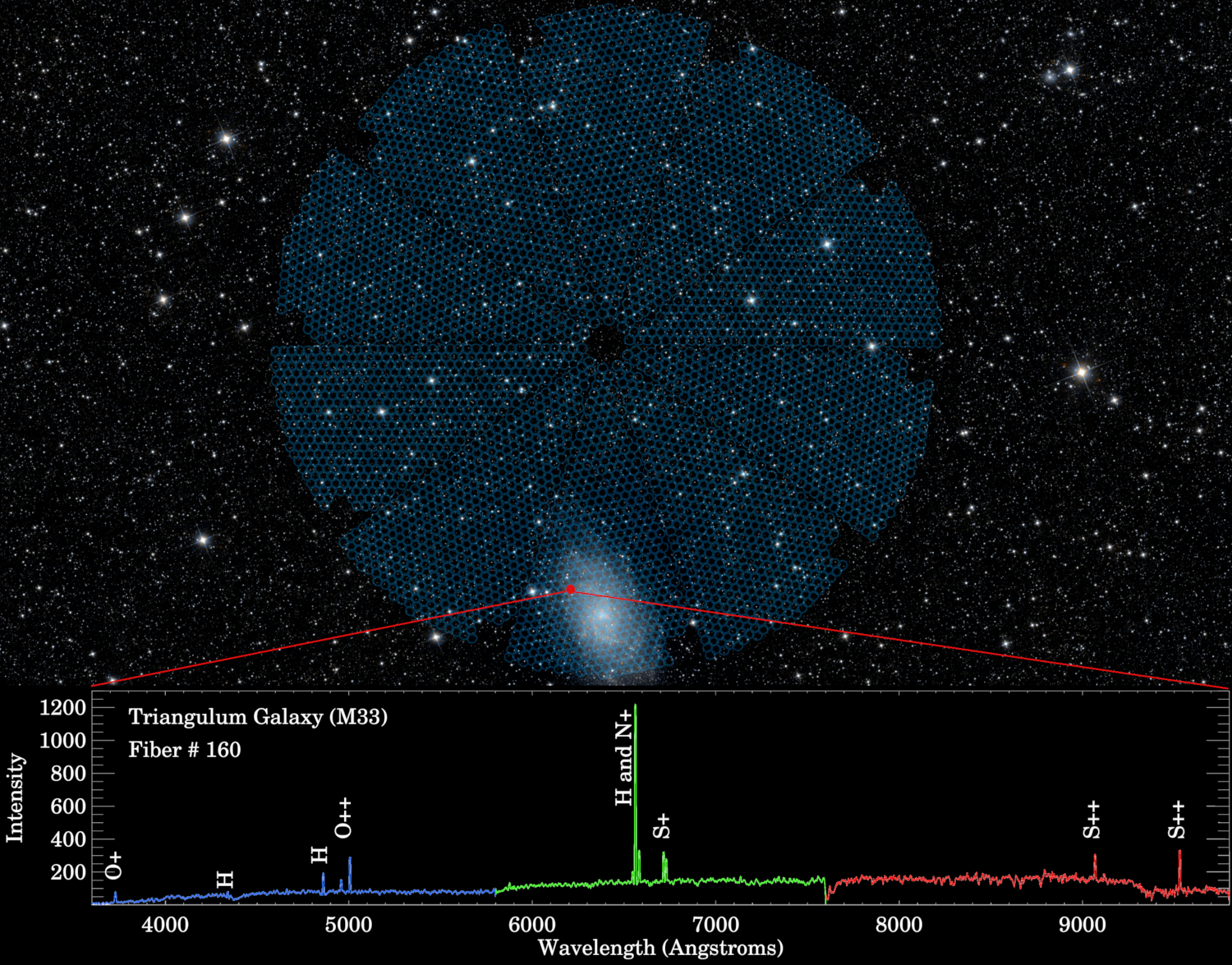 DESI’s 5000 spectroscopic “eyes” can cover an area of sky about 38 times larger than that of the full moon, as seen in this overlay of DESI’s focal plane on the night sky (top). Each one of these robotically controlled eyes can fix a fiber-optic cable on a single object to gather its light. The gathered light collected from a small region in the Triangulum galaxy (bottom) by a single fiber-optic cable (red dot) is split into a spectrum (bottom) that reveals the fingerprints of the elements present in the galaxy and aid in gauging the distance to the galaxy. The test spectrum shown here was collected by DESI on Oct. 22. (Credit: DESI Collaboration; Legacy Surveys; NASA/JPL-Caltech/UCLA)

It was the first test of the Dark Energy Spectroscopic Instrument, known as DESI, with its nearly complete complement of components. The long-awaited instrument is designed to explore the mystery of dark energy, which makes up about 68 percent of the universe and is speeding up its expansion.
DESI’s components are designed to automatically point at preselected sets of galaxies, gather their light, and then split that light into narrow bands of color to precisely map their distance from Earth and gauge how much the universe expanded as this light traveled to Earth. In ideal conditions DESI can cycle through a new set of 5,000 galaxies every 20 minutes.

The latest milestone, achieved Oct. 22, marks the opening of DESI’s final testing toward the formal start of observations in early 2020. Installation of DESI began in February 2018 at the Nicholas U. Mayall Telescope at Kitt Peak National Observatory near Tucson, Arizona. Over the past 18 months, a bevy of DESI components were shipped to the site from institutions around the globe and installed on the telescope. 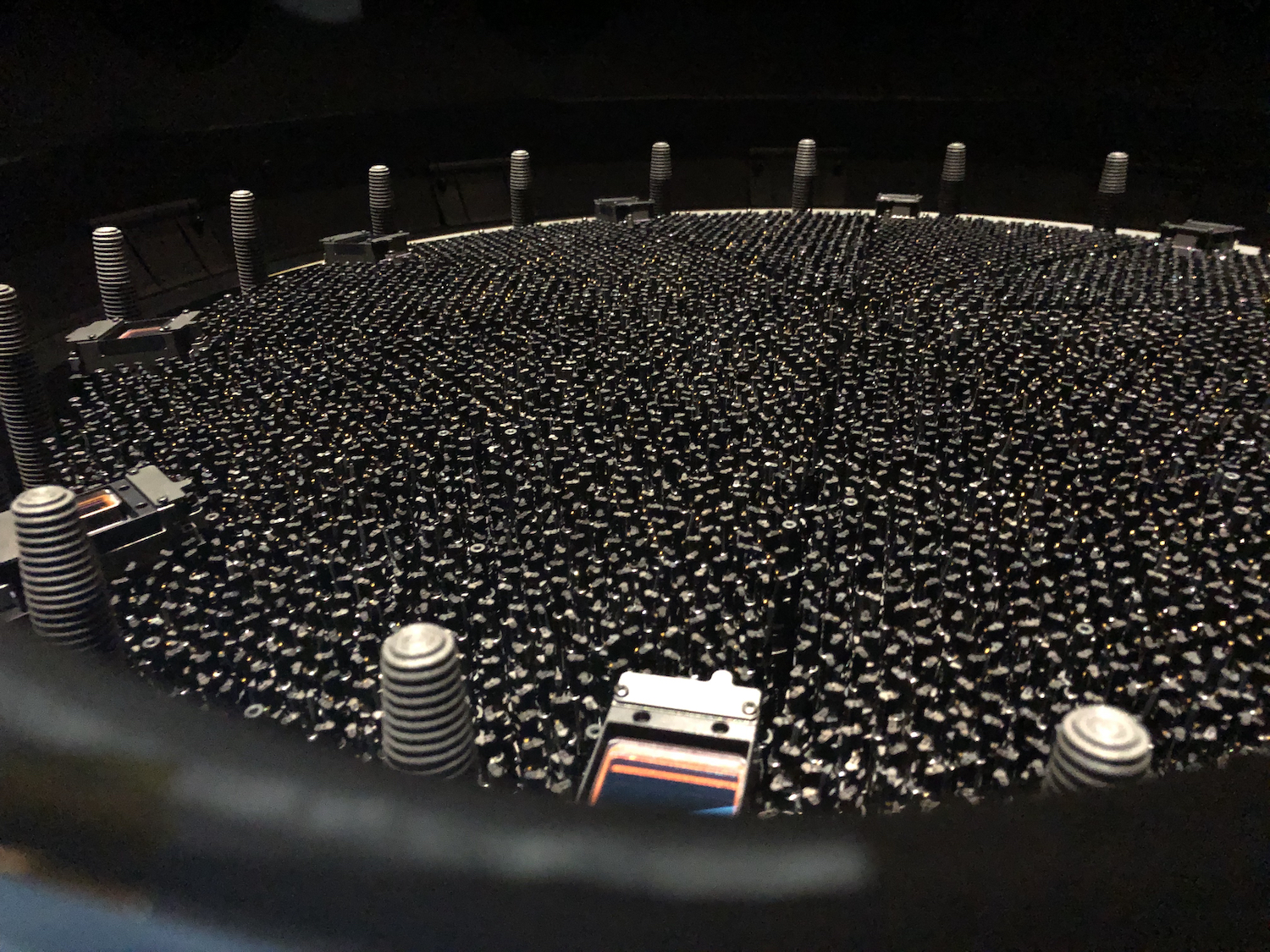 DESI’s focal plane, which carries 5,000 robotic positioners that swivel in a choreographed “dance” to individually focus on galaxies, is at the top of the telescope. These little robots – which each hold a light-gathering fiber-optic cable that is about the average width of a human hair – serve as DESI’s eyes. It takes about 10 seconds for the positioners to swivel to a new sequence of targeted galaxies. With its unprecedented surveying speed, DESI will map over 20 times more objects than any predecessor experiment. The focal plane is fed by corrector optics which provide a 3-degree-diameter field of view. The optical fibers mounted to the positioners extend 50 meters down the telescope to feed 10 broad-band spectrographs, each containing three detectors. The spectrographs cover a spectral range of 360 nanometers (nm) to 980 nm with a resolution of 2,000 to 5,000, enabling DESI to probe redshifts up to 1.7 for emission line galaxies and 3.5 for the lyman-α spectra from quasars.

“This is a very exciting moment,” said Nathalie Palanque-Delabrouille, a DESI spokesperson and an astrophysics researcher at France’s Atomic Energy Commission (CEA) who has participated in the selection process to determine which galaxies and other objects DESI will observe. “The instrument is all there. It has been very exciting to be a part of this from the start,” she said. “This is a very significant advance compared to previous experiments. By looking at objects very far away from us, we can actually map the history of the universe and see what the universe is composed of by looking at very different objects from different eras.”

All this was only possible with substantial contributions to DESI from European partners: The University College London oversaw the optical system of large lenses in the corrector, Durham University the fiber optic system that brings light from the focal plane to the spectrographs. The Aix-Marseille University worked closely with the spectrograph vendor Winlight (in Pertuis, France) to assemble and test the spectrographs, CEA/Saclay provided the system of 30 cryostats for the ultra low-noise sensors inside each spectrograph, the Laboratoire de Physique Nucléaire et de Hautes Énergies in Paris developed and installed the calibration system for the spectrographs. A Barcelona-Madrid consortium including IFAE (Institut de Fisica d’Altes Energies), ICE (Institut de Ciències de l’Espai), CIEMAT (Centro de Investigaciones Energéticas, Medioambientales y Tecnológicas) and IFT (Instituto de Física Teórica) developed the ten high-sensitivity guiders that reside on the focal plane – these guide the Mayall telescope on our targets. The École Polytechnique Fédérale de Lausanne worked with US partners and the Swiss vendor Maxon (in Sachsein, Switzerland) to develop the robotic system in DESI.