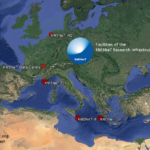 Written by katrinlink on 10th March 2016. Posted in 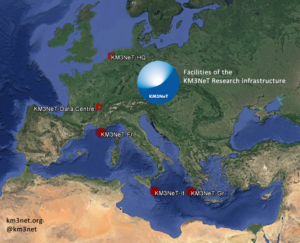 The European Strategy Forum on Research Infrastructures – ESFRI – has presented its new roadmap with six new research infrastructures including KM3NeT 2.0. The roadmap also includes the Cherenkov Telescope Array as a continuing project.

To be eligible for the roadmap a research infrastructure should have at least three countries with funding commitment and political support.

“Full steam ahead for KM3NeT 2.0. The ESFRI review was maybe not easy, but certainly beneficial.” said Maarten de Jong, spokesperson of the KM3NeT Collaboration, during his talk at the launch event, in which he explained the scientific goals of the research infrastructure and highlighted the recent progress.

Responding to KM3Net 2.0’s inclusion, S. Harissopulos, director of the Institute of Nuclear and Particle Physics of NCSR “Demokritos” said: “The Greek Minister of Research encouraged us to actively participate in KM3NeT 2.0.”

Michel Spiro, chairperson of the KM3NeT Scientific and Technical Advisory Committee added: “This is a new step towards neutrino astronomy and further deciphering the Universe and neutrino mysteries.”

Antonio Masiero, the chairperson of the KM3NeT Resources Review Board, chairperson of the APPEC Scientific Advisory Committee and vice-president of INFN notes, “This is excellent news, KM3NeT continues to be considered by EU as an important project and an innovative research infrastructure at the continental level. This vote of confidence will be instrumental as KM3NeT rapidly moves forward on the realisation of the envisaged research facility.”

APPEC Chair Frank Linde said: “As APPEC Chair, I am incredibly pleased and proud to see both CTA and KM3NeT 2.0 selected as ESFRI Projects; I quote: ‘… selected for scientific excellence and maturity …’. Their timely realization is amongst APPEC’s top priorities and will allow us to probe deeper in the mysteries of the extreme Universe. KM3NeT 2.0 has a good chance to resolve the neutrino mass hierarchy and with some luck CTA and/or KM3NeT could pinpoint spots in the Universe where Dark Matter annihilates itself!”

The launch event was webcast and will be available for view again at ESFRI website.