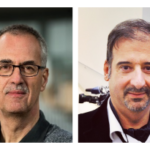 ET – the future of Gravitational Wave observation in Europe

Written by katrinlink on 18th September 2020. Posted in

During the last year the Einstein Telescope (ET) Collaboration was busy with the preparation for an ESFRI Roadmap proposal which was just submitted. This is an enormously important step for the realization of the project and was a lot of work for the whole collaboration. In this interview we will discuss with Michele Punturo and Frank Linde the status of the ET project and the way to its completion.

ET shall be one of the so-called 3rd generation Gravitational Wave (GW) observatories. Can you explain what characterizes this new generation and why we need such observatories? 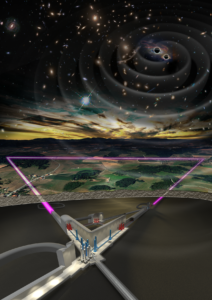 Punturo: ET will be a 3rd generation GW observatory because it will have a sensitivity to GW signals by one order of magnitude better than the advanced detectors (Advanced Virgo and Advanced LIGO). This will reflect directly on the detection range, a factor 10 larger, and on the detection rate, approximately increased by a factor 1000. Furthermore, ET is designed to enhance the sensitivity at low frequency, below 10Hz, focusing the attention in this way on massive sources, like the intermediate-mass black holes, recently discovered by Advanced Virgo and Advanced LIGO in a coalescence of two stellar mass black holes (GW190521). ET will be able access the entire population of stellar mass and intermediate mass black holes over the entire history of the Universe. All these characteristics will allow ET to explore for the first time the Universe through gravitational waves along its cosmic history up to the cosmological dark ages, shedding light on open questions of fundamental physics and cosmology. It will probe the physics near black-hole horizons (from tests of general relativity to quantum gravity), help understanding the nature of dark matter (such as primordial BHs, axion clouds, dark matter accreting on compact objects), and the nature of dark energy and possible modifications of general relativity at cosmological scales. ET will observe the neutron-star inspiral phase and the onset of tidal effects with high signal-to-noise ratio providing an unprecedented insight into the interior structure of neutron stars and probing fundamental properties of matter in a completely unexplored regime. In order to accomplish all these targets, ET needs to develop and implement new technologies in optics and optoelectronics (mirrors, quantum optics, fiber lasers, …), new materials (test masses in Silicon, optical coatings, …), cryogenic plants, precision mechanics for seismic filtering, system control and noise suppression. ET will need a new large infrastructure, located underground in a quiet location, in order to mitigate the seismic and environmental noise.

How would you describe the current status of the ET project?

Punturo: We realised the ET conceptual design few years ago and the development of the ET enabling technologies is already started thanks to a series of European and international grants. The 9th of September 2020 we submitted the ET proposal for the 2021 update of the ESFRI roadmap, the major European roadmap describing the most important research infrastructures for the next decades. Currently we are working on the detailed design of the infrastructure and of the detectors, developing the technologies and characterising the two sites identified for ET, one in Sardinia, Italy and one in the Meuse-Rhine Euroregion across the border between Belgium, Germany and The Netherlands. Furthermore, we are strengthening the ET collaboration, attracting groups and competences from the GW scientific community and from the neighbouring communities. In fact, multi-disciplinarity is one of the major characteristics of the GW research.

What is already ongoing on preparations, R&D-projects and site characterization projects for both possible sites in Sardinia and the Meuse-Rhine Euroregion? 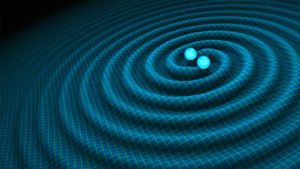 Punturo: As mentioned before, ET needs to develop new technologies to achieve its target sensitivity. In particular, we need lasers operating at different wavelength with respect to the one adopted in advanced detectors; since we will operate at cryogenic temperature, we need to produce low noise cryogenic plants, new materials (e.g. Silicon at low temperature instead of Silica) for the ET mirrors, new optical coatings, new ways to suspend that complex optical systems, filtering the seismic vibrational noise. Different groups in Europe are developing these technologies, but the ET collaboration is totally open to new contributions.

For the site characterisation we defined a common platform of requirements and parameters to be tested in the two sites, in order to have a complete and efficient comparison.

We are investigating the Sardinia as possible site for ET since the very beginning of the ET Design Study, about 10 years ago. Seismic, magnetic and acoustic sensors have been installed at different depth in the Sos Enattos mine, close to Lula (Nuoro); this mine is unused but still maintained in safe and accessible conditions. Sardinia is one of the most quiet regions in Europe in terms of natural seismic noise, geological stability and anthropic noise. This has been confirmed by very recent studies, that qualify the site of Sos Enattos as one of the quietest 40 sites in the world (in the frequency range of interest for ET). With the support of the Sardinia local government (3,5M€) an underground laboratory (SarGrav) is under realisation, to be used as seed for ET and for research activities in a quiet environment. The entire area around the Sos Enattos site is under investigation and a set of boreholes is under preparation to fully characterise the vertices of the ET site. These investigations are possible through a grant of about 18M€ provided by the Italian government, addressed to the candidature of the site. French and Polish groups are collaborating to the site characterisation. A consortium of national research institution, open and evolving toward a more international configuration is collaborating to the candidature of the site. We also evaluated the social and economic impact of the ET infrastructure in Sardinia, thanks to a very detailed study realised by the University of Sassari (ET-0008A-20, https://apps.et-gw.eu/tds/ql/?c=15437) 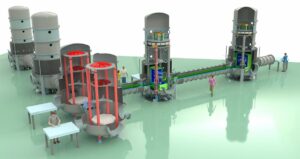 Linde: Regarding the Meuse-Rhine Euroregion, seismic studies (passive & active campaigns as well as drill holes) have started in 2017. Since May 2019 a seismic sensor at 250 meters depth is continuously monitoring the ambient seismic noise. Results to date are near the desired Einstein Telescope specifications. Supported by a large (15 M€) Interreg-EMR grant (‘E-TEST’) more detailed seismic studies will be performed by a multi-disciplinary consortium including various expert geology and seismic research groups and institutes in Belgium, Germany and The Netherlands. By 2023 E-TEST should culminate in an optimal siting of ET in the Meuse-Rhine Euroregion.

Regarding instrumentation, the focus is on ‘ETpathfinder’, a 14,5 M€ Interreg Vlaanderen-Nederland project, to realize a laser-interferometer R&D laboratory in Maastricht – home of an entirely new gravitational-waves research group – aimed at a key innovation: the use of cryogenic (10-20 K) silicon mirrors as test masses. The ETpathfinder consortium welcomes any institute/individual to join.

You just submitted an ESFRI Roadmap proposal. How does this connect with the future of the whole project?

Punturo: The ET proposal, submitted to the ESFRI roadmap, is supported by a team of five countries (Belgium, Poland, Spain, The Netherlands) leaded by Italy and the ET consortium is signed by about 40 institutions (national funding agencies, National Research Institutions and Universities) belonging also to France, Germany, Hungary, Norway, Switzerland and United Kingdom. This is a great starting point for the preparation and the realisation of the ET infrastructure. We need a real pan-European alliance to realise ET and probably it will evolve toward a so-called Global Research Infrastructure, as soon as the future of the companion project, Cosmic Explorer, in the USA, will be more defined.

Where do you consider the biggest challenges on the way to the realisation of ET? 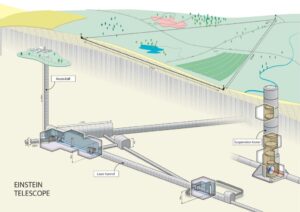 The Einstein Telescope is designed as a triangle of long tunnels, spanning 10 km each. It will be located 200-300m underground. (Credits: Thijs Balder, Nikhef)

There are different kind of challenges:

Part of your process is a Letter of Intent which should constitute the basis of the ET collaboration. Is this part already finalized or is there still the possibility to sign? 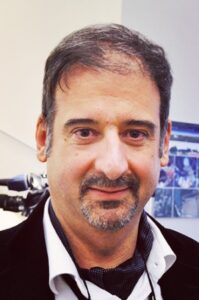 Michele Punturo is Director of Research at the Istituto Nazionale di Fisica Nucleare (Perugia, Italy). He worked at CERN, in CP violation experiments (NA31, NA48) and then in Virgo, having the role of Detector Coordinator and of Computing coordinator. He proposed and coordinated the ET design study project in 2008-2011, coordinated the ELiTES project 2012-2017, addressed to exchange technologies and researcher between the ET and the Japanese KAGRA experiment and now is co-chairing the ET steering committee. 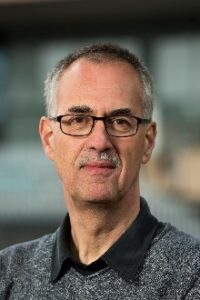 Frank Linde is professor of experimental high-energy physics –elementary particle physics– at the University of Amsterdam. He has worked on experiments at large particle accelerators such as LEP (Z and W bosons) and LHC (discovery of the Higgs boson) at CERN (Geneva). From 2004 to 2014 he was director of the National Institute for Subatomic Physics (Nikhef). In 2015-2016 he was APPEC (Astroparticle Physics European Consortium) chair. Since 2017 he leads gravitational-waves research at Nikhef. Linde has extensive hands-on and managerial experience with large scientific research infrastructures.