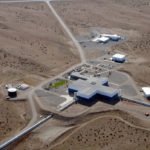 Written by katrinlink on 11th February 2016. Posted in 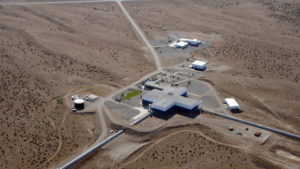 One century after Einstein’s prediction, half a century of constant cutting edge technological innovations and the tenacity of a world-wide community hunting for gravitational -waves have paid off: the first gravitational wave passing through Earth was detected on September 14, 2015 at 09:50:45 UTC! The announcement was made by the LIGO Scientific Collaboration and the Virgo Collaboration using data from the two LIGO detectors. The results have been accepted for publication in the journal Physical Review Letters.

APPEC Chair Frank Linde said: “It is with tremendous pleasure that I congratulate the LIGO-Virgo Collaboration on this monumental achievement. For sure this will prove to be a turning point in astronomy and cosmology as well as in fundamental studies of the poorest known fundamental force in Nature: Gravity. Collectively we just acquired a new tool: gravitational waves – the power of which we are all very eager to explore.

“Personally, I can hardly believe the extraordinary beauty and the wealth of information hidden in the 0.2 second long ‘ripples’ recorded by the two laser interferometers located in Hanford (WA) and Livingston (LA). Each one alone recorded the tell-tale signal of the coalescence of two massive objects (most likely black holes) as well as the subsequent ring-down signature of the merged black hole. Corrected for propagation delay (few milliseconds) and relative detector orientation, the two signals are perfectly consistent and a huge treasure trove for our scientists as already witnessed by the released publications and, I am sure, by the flood of publications to appear in the coming months.

“Regarding APPEC, Astroparticle Physics European Consortium, this first detection of a gravitational wave could not come at a better time since we have just scheduled a Town Meeting in the Grand Amphithéatre de Sorbonne in Paris on 6-7 April 2016 to discuss our new European Roadmap of Astroparticle Physics This discovery puts discussions on next generation gravitational-wave detectors like the Einstein Telescope centre stage! But today is for the LIGO-Virgo teams to enjoy, and we look forward to seeing how the world responds to their wonderful news.”

See how the story unfolded on social media.