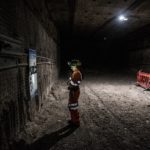 Written by katrinlink on 30th September 2018. Posted in

From deep under the North Sea, to the outskirts of Rome and the Canadian shores of the Pacific, the winning images from the 2018 Global Physics Photowalk competition capture the beauty, precision and international nature of humankind’s search to understand the Universe.

Selected from thousands of images submitted by hundreds of amateur and professional photographers around the world, the Global Physics Photowalk provided a rare glimpse into the people, engineering and technology behind some of the world’s most inspiring, amazing and sometimes oddest science.

The 18 participating laboratories, including Europe’s INFN, STFC and CERN, study science topics ranging from exploring the origins of the Universe to better understanding how our planet’s climate works, and from improving human and animal health to helping deliver secure and sustainable food and energy supplies for the future.

Each lab held their own local competition, and has now entered their top three images into the global competition. From those images, a public online vote chose the top three, while a panel of expert photographers and scientists also chose their three favourites.

Dr Vanessa Mexner is a science communicator at Nikhef, the National Institute for Subatomic Physics in the Netherlands. She represented the Interactions Collaboration on the judging panel and described the competition as inspiring and amazing.

She said: “The pictures capture the beauty of science and the people behind this in such an amazing way. Through all these wonderful pictures, we can offer a broad audience a unique glimpse into the people, the engineering and technology, the science – so a big ‘thank you’ to all the photographers who took part in the global competition.”

Professional photographer Enrico Sacchetti was a member of the international judges’ panel. Commenting on Simon Wright’s winning image he said: “The lighting is what attracts you to this silent but powerful image. It’s great seeing her completely at ease in this lonely environment.” 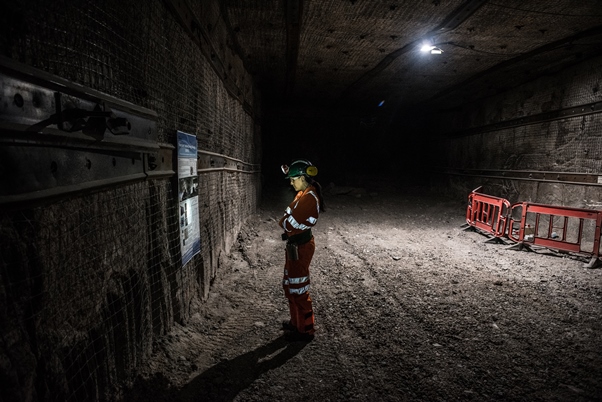 Panel member Ale de la Puente, a Mexican artist and designer, also praised the winning image: “Alone where the unknown still lies, there is light, darkness, and a shadow cast that intriguingly take us deep back to the tunnel, beyond the excellence of technique the metaphor of pushing the horizon far away from light and our view is compelling.”

Enrico and Ale also praised Stefano Ruzzini’s image of a silicon-strip particle detector taken at the Frascati National Laboratories of the Italian Institute for Nuclear Physics: 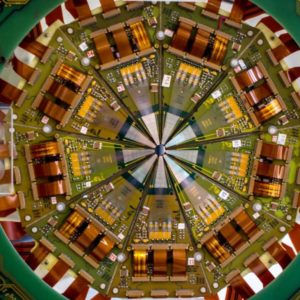 Ale said: “Not only the colors, the symmetry, and quality of the image, but the mysterious beauty of a contemporary technology mandala, reminds the endless search for knowledge.”
Enrico said: “The almost perfect symmetry is fantastic. I’m attracted by the strong colours but I’m especially attracted by the complete lack of any reference to scale!”

Find out more about the competition and see all of the winning photos on the Interactions website.