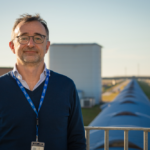 Written by katrinlink on 7th October 2020. Posted in

Interview about the Gravitational Wave GW190521, detected by Virgo and LIGO, with Giovanni Losurdo

On 2 September the Virgo and LIGO collaborations published their discovery of the most massive Black Hole ever measured with Gravitational Waves. This is another huge milestone in the field of Gravitational Wave observations. The scientists observed the merging of two Black Holes of 66 and 85 solar masses, which generated a final Black Hole of around 142 solar masses. The particularity of this measurement and its impact on our understanding and knowledge of Black Holes will be explained to us by Giovanni Losurdo, spokesperson of the Virgo collaboration.

First of all congratulations to this new finding! Can you explain, why this observation is so unique? 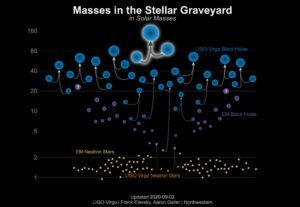 Thank you! So far we knew two black hole families: the stellar black holes, with masses up to a few tens of solar masses (MS) and supermassive black holes (millions to billions MS). For the first time we have observed a so-called Intermediate Mass Black Hole in the range 100-1000 MS. This observation might be helpful to understand the origin of supermassive black holes and thus contribute to unveil one of the mysteries of our cosmos. And (what a happy coincidence!) while doing this interview we get the news about the Nobel Prize in Physics awarded to Reinhard Genzel and Andrea Ghez for the discovery of Sagittarius A, the supermassive black hole at the center of the Milky Way, together with Roger Penrose for his theoretical contributions.

Not only the highest ever measured remnant Black Hole is special in this system but also the mass of one of the primary Black Holes. Can you tell us more about this?

Indeed, there was a black hole in the binary system which should not exist…And this is the second reason why this event is so special, which also makes it puzzling. A mass of 85 MS falls in the so-called pair instability gap, a very important phenomenon in determining the fate of massive stars. The core of such stars may become very hot, so hot that photons become energetic enough to produce electron-position pairs. They thus disappear and, consequently, the radiation pressure, which competes with gravity maintaining the core stable, is progressively weaker and the star collapses. In this kind of collapse, according to the stellar evolution theory, there is no way to form a black hole as big as 85 MS. So how did it form? In one of the papers published on GW190521we have studied possible formation mechanisms, but each of them requires conditions which are not very likely. In any case astrophysicists have to scratch their heads!

What are the astrophysical implications from this discovery? 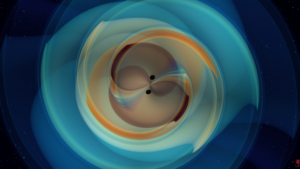 A still image from a numerical simulation of two black holes that inspiral and merge, emitting gravitational waves. The black holes have large and nearly equal masses, with one only 3% more massive than the other. The simulated gravitational wave signal is consistent with the GW190521 observation made by the LIGO and Virgo. (Credit: N. Fischer, H. Pfeiffer, A. Buonanno (Max Planck Institute for Gravitational Physics), Simulating eXtreme Spacetimes (SXS) Collaboration)

The LIGO and Virgo observations are unveiling the properties of binary system of stellar mass black holes. However, it is still an open question how binary black holes form and evolve; if they directly come from the evolution of an isolated binary systems of massive stars or if they are formed in dense environment, such as star clusters due to dynamical interactions. The properties of GW190521 signal lay the foundation for understanding its origin. The most plausible scenarios of formation of the two massive blackholes giving birth to the intermediate mass black hole are via multiple stellar coalescences, or via hierarchical mergers of lower-mass black holes in star clusters or in active galactic nuclei. The dynamical scenario is also supported by the mild evidence for precession found in the gravitational-wave signal.

Does this have any new implication on what we know on Dark Matter and Dark Energy?

Investigating the cosmos through gravitational waves may shed light on the 95% of the universe which we do not know yet.
For instance, the collapse of large overdensities in the early Universe might have directly formed so-called primordial black holes. Such black holes did not originate from stars, they did exist well before the stars. They are extremely interesting objects since their existence, if proved, could account for a fraction of the dark matter. In principle, it is possible that the binary components of GW190521 have a primordial origin, though this scenario is disfavored by the large spin of the primary black hole.
Moreover, detecting compact binary coalescences up to cosmological distances through gravitational waves provide an absolute distance scale measurement. The relation among gravitational wave distances and redshift carry the signature of the dark energy. Gravitational-wave detectors of 3rd generation, such as Einstein Telescope, will observe a larger redshift range ideal to investigate the nature of the dark energy and modifications of gravity on cosmological scales.

Do you expect to see more Black Hole mergers with these high masses? 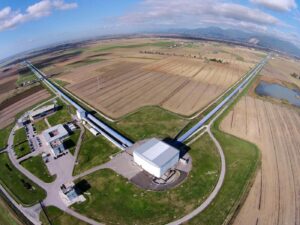 Virgo and LIGO are now being upgraded in order to increase the volume of universe they can explore and thus the event rate. In fact, we alternate observing runs to periods when we work on enhancing the sensitivity of the detectors. Moreover, the KAGRA detector will join the network in the next observing run starting in 2022. As the world wide gravitational wave network becomes more sensitive the event rate increases. And so we expect that, in the next run, we might observe more events of this kind together with new, unexpected ones.

Events with high mass occur at lower frequencies – where LIGO and Virgo are less sensitive – do you expect to be still able to measure even higher masses?

In principle as we improve the sensitivities of the detector we might be able to see events with mass even larger than GW190521. However, the real breakthrough towards higher masses will happen with Einstein Telescope, the third generation European project aiming to widen the Virgo bandwidth down to 1 Hz. Furthermore, ET will explore all the observable Universe increasing the probability to detect the merger of intermediate massive black-holes. 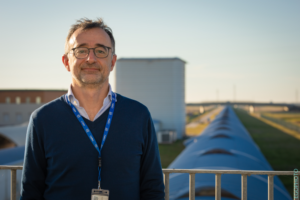 Giovanni Losurdo is a Research Director of the National Institute of Nuclear Physics (INFN). He has worked on the Virgo experiment since its early years, in the 1990s. From 2009 to 2017 he has been the Project Leader of Advanced Virgo, the interferometer enhancement program that made it possible, in August 2017, to contribute to the observation of the gravitational waves emitted in the merger of two neutron stars, an epochal discovery that initiated a totally new way of observing the cosmos: multi-messenger astronomy. He is now serving as Spokesperson of the Virgo Collaboration.
He won the Galilei Prize for Science and the Tartufari Prize for Physics and Chemistry from the Accademia dei Lincei. He was awarded by President Mattarella  with the honor of “Commendatore dell’Ordine al Merito della Repubblica Italiana”. Since 2019 he is a member of the Accademia Nazionale dei Lincei.