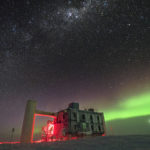 Written by katrinlink on 12th July 2018. Posted in

An international team of scientists has found the first evidence of a source of high-energy cosmic neutrinos, ghostly subatomic particles that can travel unhindered for billions of light years from the most extreme environments in the universe to Earth. 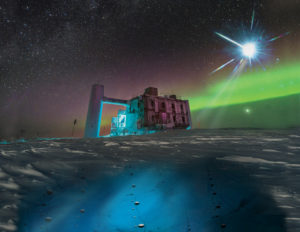 The IceCube Lab at the South Pole with aurora
Credit: Icecube/NSF

The observations, made by the IceCube Neutrino Observatory at the Amundsen–Scott South Pole Station and confirmed by telescopes around the globe and in Earth’s orbit, help resolve a more than a century-old riddle about what sends subatomic particles such as neutrinos and cosmic rays speeding through the universe.

APPEC’s General Assembly Chair, Antonio Masiero commented, “This year APPEC launched its new roadmap for the European astroparticle physics strategy over the next decade.  A central pillar in the construction of this roadmap is represented by the multi-messenger approach to explore the most energetic events occurring in the Universe.

“The first success was seen last year with the simultaneous observations of the gravitational waves and the photons emitted in the merger of two neutron stars. Today the IceCube Neutrino Observatory marks a major milestone on our path to establish the validity and feasibility of this new way of the observing the Universe with the announcement of the second observation of a multi-messenger event, this time related to neutrinos and photons emitted in the accretion phase of a far black hole.

“Multi-messenger astronomy allows an unprecedented level of investigation of the structure and dynamics of celestial bodies and all the high-energy events of the Universe. APPEC plays a crucial role in favouring the synergy of the relevant European assets in astroparticle physics in general and the multi-messenger field in particular. This is a research field where Europe has all the potential to play a world-leading role in the coming years“

The research has been published in the journal Science.