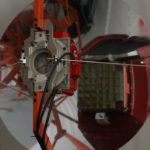 Written by katrinlink on 1st December 2015. Posted in 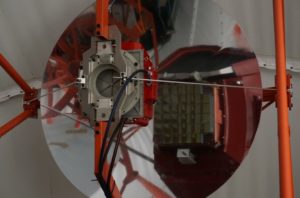 The GCT prototype is first CTA telescope prototype equipped with an operational camera. It uses high-speed digitisation and triggering technology capable of recording images at a rate of one billion frames per second and sensitive enough to resolve single photons. To detect the short flashes of light produced by gamma rays as they hit the Earth’s atmosphere, the telescope’s camera has to be about a million times faster than a DSLR camera.

The telescope uses the Schwarzschild-Couder dual-mirror optical design, giving it good image quality over a large field of view and making it lighter than a single-mirror system.

The GCT is one of CTA’s small size telescopes (SSTs) and will cover the high end of the CTA energy range, between about 5 and 300 TeV (tera-electronvolts). Around 70 SSTs are needed to make sure the array is sufficiently sensitive at these enormous energies. Other small size telescopes are being prototyped and tested in Italy and Poland.