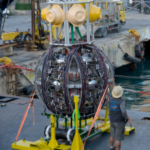 Written by katrinlink on 8th December 2015. Posted in 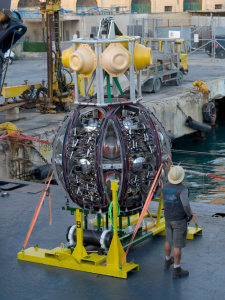 On the morning of 3 December, the installation of KM3NeT began, as the first vertical neutrino detection string was put in place in the depths of the Mediterranean Sea south of Sicily, and began delivering data. Hundreds of detection strings will be used to build the next generation neutrino telescope, each one carrying 18 light sensor modules to register the faint flashes of Cherenkov light that signal the interaction of neutrinos with the seawater surrounding the telescope.

Marco Circella, the technical coordinator of KM3NeT explained “The large depth of sea water shields the telescope from particles created by cosmic rays in the atmosphere above the telescope. Constructing such a large infrastructure at these depths is a tremendous technical challenge. Making the underwater connections requires custom-designed electrical and fibre optic connectors. The crew of the Ambrosius Tide are experts in performing such delicate submarine operations.”

The string was successfully powered on from the shore, and data started to arrive. Rosanna Cocimano, who coordinates the power systems for KM3NeT outlined the process: “An electro-optical network of cables distributes the high-voltage power from the shore station to the sensor modules in the deep sea. The measured light signals are digitised by the sensor modules and the resulting data returned to the shore station via optical fibres.”

Maarten de Jong, director of KM3NeT said: “This important step in the verification of the design and the technology will allow the KM3NeT Collaboration to proceed with confidence toward the mass production of detection strings and their installation at the sites in the Mediterranean Sea off-shore from Italy and France. A new era in neutrino astronomy has begun.”