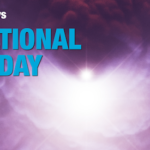 Written by katrinlink on 18th December 2020. Posted in

On November 4, 2020, the International Cosmic Day (ICD) took place for the 9th time. It focuses on the measurement of cosmic rays that surround us all the time, but are mostly unnoticed. During this day students should therefore explore these comsic rays and discover what secrets they bring with. The pandemic posed special challenges for this international event and at the same time offered the chance to explore new, innovative and unusual approaches. While in previous years all participants should measure the zenith dependancy of cosmic muons, this year both topic and format of the event was quite open. The only requirements was that the young people should learn about cosmic particles. This allowed to explore also new formats which can be used in the future. 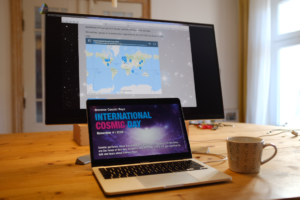 Most of the activities during the International Cosmic Day took place online due to the pandemic. (Credits: DESY)

The type of activity was decided by the organizers on site – depending on what was possible. Some groups investigated the zenith angle distribution of muons with their own detectors or provided data, as known from previous years, and others met purely digitally. Colleagues in Italy streamed about four hours via Facebook, showed experiments and gave lectures. School classes or young people at home joined in. A a new form of cloud chamber workshop was tried out at DESY in Zeuthen. A teacher borrowed the cloud chamber sets for the classrom and together with the students they made their observations. A week later during a video meeting with the DESY team, scientists talked about their careers as researchers, gave insights into their daily tasks and showed pictures of their work on the experiments while the young people could asked a variety of questions: Starting from how to get a physics degree to technical and scientific questions about the observations with the cloud chamber. After this exchange, the young people summarized their day’s results in a page that will be included in the joint “conference booklet” which is prepared after the ICD with input from all participants.

In total, more than 4700 young people in 100 cities from 16 countries got involved with cosmic particles on this day. The exchange in the international video meeting calls was still the highlight for many young people, as the organizers reported. Offers such as an online quiz, a welcome message with greetings in the respective language of the participating countries or video meeting calls with up to five groups created a common framework and gave a sense of international flair.