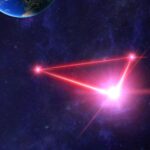 Written by katrinlink on 10th August 2022. Posted in 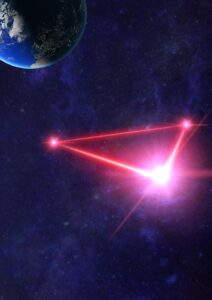 LISA, the future gravitational wave observatory in space, has passed major milestones and is expected to fly in the mid-2030s. Recent developments of LISA include the review of technologies and planning according to ESA´s standard development logic, and the U.S. National Academy of Sciences’ Decadal Review. LISA has successfully mastered both milestones:

Mission Formulation Review and begin of Phase B1

LISA, the Laser Interferometer Space Antenna, has reached an important milestone: it has passed the comprehensive “Mission Formulation Review” (MFR) and entered the next phase of development, Phase B1. The MFR review team, consisting of experts from ESA, NASA, the scientific community and industry, identified no showstoppers and confirmed that LISA has successfully reached a maturity sufficient to proceed to the next stage. The MFR is a prerequisite for mission development to continue. In an ESA mission lifetime cycle, the MFR is the formal end of Phase A (mission feasibility). Building upon the foundations laid in Phase A, the team now focuses on developing the requirements guidelines for the mission.

“LISA is well underway. In Phase B1 we do more detailed design work to establish the complete set of mission requirements and the verifications approach”, says Prof Karsten Danzmann, Lead of the LISA Consortium.

Martin Gehler, LISA Study Manager at the European Space Agency, adds: “The review was a major success for all stakeholders and the fruit of vigorous work on Consortium, NASA, and ESA side over the last years.”

Transitioning into Phase B1 finally lifts the mission out of concept studies and marks a major milestone for all of the scientists and engineers involved. With an implementation duration of around 10 years, LISA is expected to fly in the mid-2030s and, following a year-long cruise to its final, low-disturbance destination, can start to fulfil its mission to observe gravitational waves from space and enable new scientific discoveries.

The US National Academy of Sciences has noted the important presence in the NASA Program of Record for the implementation and execution of the LISA Mission, led by the European Space Agency. In the Astrophysics Decadal Survey, a panel of experts evaluated and prioritized research activities in astronomy and astrophysics in the coming decade. The survey noted the “tremendous promise” of the future gravitational wave space mission LISA because of the expectation that observations of gravitational waves in space will make “astronomical measurements that will change paradigms.”

The online LISA International Symposium took place from July 25-29 and was organized by the Institute for Gravitational Research of the University of Glasgow. Updates on all areas of the project were presented during this meeting and recors of the talks are available here:

LISA Through observations of gravitational waves, LISA will offer an unprecedented and unique view of the Universe, quite different from any other space telescope and any ground-based gravitational-wave detector. LISA will deliver pioneering scientific results enabling insights not available through electromagnetic observations.

Combining LISA observations with those of other ground- and space-based facilities will also allow scientists to make enormous advances in multi-messenger astronomy.

LISA will observe gravitational waves in a lower frequency band than those detectable by LIGO and Virgo, allowing us to observe much larger systems at earlier times in the Universe’s history.

The LISA instrument will consist of three spacecraft in a triangular configuration with 2.5 million kilometer arms, moving in an Earth-like orbit around the Sun. Gravitational waves from sources throughout the Universe will produce slight oscillations in the arm lengths (smaller than the diameter of an atom). LISA will capture these motions and thus measure the gravitational waves by using laser links to monitor the

displacements of test masses free-falling inside the spacecraft. The LISA satellites are being built by ESA, ESA member nations, and NASA.

LISA´s hardware got its first and very successful test in space with the LISA Pathfinder (LPF) mission, led by ESA with NASA participation. This included a thorough test of crucial components of LISA´s technology. LPF demonstrated that it’s possible to place and maintain test masses in free-fall to an astonishing level of precision, and that the exquisite metrology needed for LISA meets the requirements.