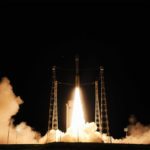 Written by katrinlink on 3rd December 2015. Posted in 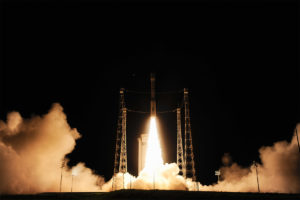 LISA Pathfinder, the European Space Agency mission to test technologies for gravitational wave detection in space, has been launched from Europe’s spaceport in Kourou, French Guiana.

LISA Pathfinder is designed to demonstrate that free particles follow geodesics in space-time. It will do this by tracking two test masses in free fall using very precise laser interferometry. The spacecraft faced the challenge of keeping the test masses safe during the launch, whilst then being able to keep them in space with no external forces acting on them.

The distance between the test masses on board the spacecraft is too small to detect gravitational waves, but it is designed to show the technologies needed for a future mission that would be large enough to make the effects of a low-frequency gravitational wave measurable.

The mission carries the LISA Technology Package including inertial sensors, interferometric readout, payload computer and diagnostic system – provided by European companies, research institutes, and the European Space Agency; and the Disturbance Reduction System which is testing technology for NASA and consists of a processor running drag-free control software, and micro-Newton colloidal thrusters. 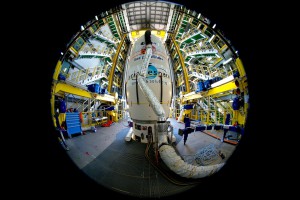 The spacecraft was launched aboard a Vega rocket to a parking orbit around Earth. It will use its own propulsion module to travel on to the first Sun-Earth Lagrange point, L1. The journey and calibration phases will take a total of about three months. The European Space Agency intends to fly a large mission dedicated to the gravitational Universe as the third large mission of the current Cosmic Vision programme. The expected launch is in 2034.

Watch the launch and media briefing confirming acquisition of signal.