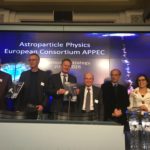 Written by katrinlink on 9th January 2018. Posted in 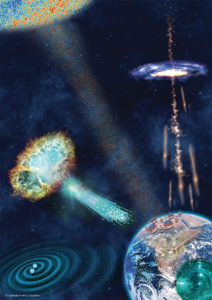 Gravitational waves, neutrino, dark matter and gamma ray research are high on the list of research priorities being recommended today with the launch of the latest European astroparticle physics strategy.

Astroparticle physics is a relatively new and rapidly growing field that is already achieving important results: the most recent and well-known being the discovery of gravitational waves that has opened a new era of multi-messenger astronomy and earned the field the 2017 Nobel Prize for physics.

Astroparticle physicists from across Europe have gathered today in Brussels, alongside their international colleagues and important guests from the European Commission, to celebrate the official announcement of the new strategy by the Astroparticle Physics European Consortium (APPEC) which will guide the community’s recommended research priorities over the next ten years. By acting coherently on these recommendations, Europe will be able to exploit fully the tantalising potential for new discoveries that is highlighted within the strategy document.

APPEC is calling for continued experimental efforts and funding support in these areas in particular through big projects endorsed by the consortium and community such as the Cubic Kilometre Neutrino Telescope (KM3NeT), the Cherenkov Telescope Array (CTA), future gravitational interferometers (the Einstein Telescope) and a substantial upgrade of our underground research infrastructures (the Gran Sasso laboratory, in particular). The report also includes recommendations addressing, in addition to the scientific issues, crucial organisational aspects as well as important societal issues such as gender balance, education, public outreach and relations with industry.

“This is such an exciting time for astroparticle physics!” said Antonio Masiero, chair of APPEC and a physicist at the National Institute for Nuclear Physics (INFN) and the University of Padua, Italy.

“Never before has our understanding of the fundamentals of our Universe been so great and yet, at the same time, never before have we faced so many un-answered questions to solve, such as what is dark matter that together with dark energy makes up a huge 95% of our Universe, or what is the mechanism that gives neutrinos mass, or even simply why matter (and therefore ourselves) even exists at all! Revealing the answers to these questions will tell us a lot about the origins, evolution and overall structure of the Universe, and will reshape our understanding of physics.

“This work needs a collaborative effort and APPEC is at the centre of making sure that the European research community and experiments are at the global forefront of these discoveries. Building on the successful work of the previous APPEC roadmap in 2011, and based on recommendations from across the full breadth of the astroparticle physics research and funding communities, APPEC will collaborate with our colleagues to implement the strategy recommendations concerning the cosmic messengers, neutrino physics, the dark side (dark matter and energy) and the origin of the Universe (through the study of the cosmic background radiation).

“Such a task represents an enormously fascinating adventure into uncharted scientific territory.”

The new strategy is available now on the APPEC website.

Further information and copies of the strategy are available from the APPEC communications office:

APPEC is a consortium of 18 funding agencies, national government institutions, and institutes from 16 European countries, responsible for coordinating and funding national research efforts in astroparticle physics.

The APPEC General Assembly gathers heads of agencies around Europe and observers from international organizations such as CERN, the European Southern Observatory (ESO) and the European Committee for Future Accelerators (ECFA), to coordinate a collective European strategy for astroparticle physics, execute the recommendations of the roadmap and to create a forum where future actions are discussed and common endeavours emerge.