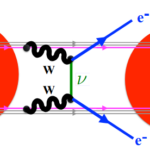 Written by katrinlink on 12th December 2019. Posted in

The APPEC General Assembly and the Scientific Advisory Committee (SAC) appointed a sub-committee to discuss the searches for the neutrinoless double beta decay and the future of the European programme. This sub-committee should advise APPEC on the European (and international) programme in double beta decay physics. It should report to the APPEC SAC, providing an assessment of the current and future scientific opportunities in double beta decay over the next 10 year period. In October this year, the sub-committee published their report on arXiv: https://arxiv.org/abs/1910.04688. This document, which was approved by the APPEC SAC was then discussed during the APPEC Community Meeting on Neutrinoless Double Beta Decay held in London on Oct. 31, 2019. About 50 people attended it and discussed the contents of the document and the necessary future steps for neutrinoless double beta (0nubb) decay especially in Europe. All presentations are collected in https://indico.cern.ch/event/832454/timetable/#20191031.

The meeting was opened by the APPEC Chair, Teresa Montaruli, who highlighted the importance to receive comments from the APPEC Community on the document and endorse it and the recommendations contained in it. The Chair of the SAC, Laura Baudis, remembered the APPEC Roadmap recommendation on neutrinoless double beta decay: APPEC strongly supports the present range of direct-neutrino mass measurements and searches for neutrinoless double-beta decay. Guided by the results of experiments currently in operation and in consultation of its global partners, APPEC intends to converge on a roadmap for the next generation of experiments into neutrino mass and nature by 2020. Laura Baudis explained the full process of forming the panel who edited the document and the mandate of the panel defined by the SAC to execute APPEC recommendation of the panel.

These are the concluding recommendations as they can be found in the Double Beta Decay APPEC Committee Report:

“Given the importance of neutrinoless double beta decay searches, the leading role Europe is playing and the prospects for the future, we provide below the key recommendations in order of relevance.

Recommendation 1. The search for neutrinoless double beta decay searches is a top priority in particle and astroparticle physics.

Recommendation 2. A sustained and enhanced support of the European experimental programme is required to maintain the leadership in the field and exploit the broad range of expertise and infrastructure,and fostering existing and future international collaborations.

Recommendation 3. A multi-isotope program at the highest level of sensitivity should supported in Europe in order to mitigate the risks and to extend the physics reach of a possible discovery.

Recommendation 4. A programme of R&D should be devised on the path towards the meV scale for the effective Majorana mass parameter.

Recommendation 5. The European underground laboratories should provide the required space and infrastructures for next generation double beta decay experiments and coordinate efforts in screening and prototyping.

Recommendation 6. The theoretical assessment of the particle physics implications of a positive observation and of the broader physics reach of these experiments should be continued. A dedicated theoretical and experimental effort, in collaboration with the nuclear physics community, is needed to achieve a more accurate determination of the NMEs.“