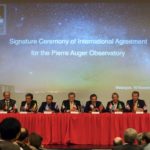 New agreement for continued operation of the Pierre Auger Observatory

Written by katrinlink on 24th November 2015. Posted in 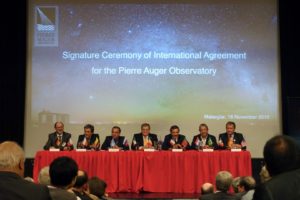 The AugerPrime symposium held on 15-16 November 2015 saw the signing of a new international agreement for the operation of the Pierre Auger Observatory for the exploration of cosmic rays until 2025. Collaborators and science funding agency representatives gathered in Argentina to sign the agreement, which will allow for new scintillation detectors to be added to the 1660 existing detectors, as well as faster and more powerful electronics.

Read the report in full on the Pierre Auger Observatory website.

Astrid Chantelauze, science outreach manager of the Helmholtz Alliance for Astroparticle Physics and Marie-Noëlle Rolland, freelance graphic designer, created a blog for their attendance at AugerPrime.

Get a taste of their travels here: