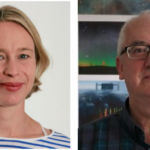 Written by katrinlink on 17th December 2020. Posted in

On December 9 at the General Assembly Meeting, a new Chair and a new General Secretary were appointed. The new Chairperson of the General Assembly (GA), which is the strategic and decision-making supervisory body, is Andreas Haungs who follows Teresa Montaruli. The new General Secretary Katharina Henjes-Kunst, following Job de Kleuver, now chairs the Joint Secretariat (JS), which is the executive body of APPEC. Both have long been closely engaged with APPEC and we are looking forward working with them in the next two years. In this interview they will tell us a bit about themselves and about their vision for the future of APPEC. 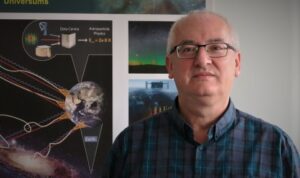 “APPEC can only be successful if there is close interaction between the three pillars GA, JS, and SAC. This is the recipe for APPEC’s success and I look forward to a functional and lively exchange between these three bodies.”
Andreas Haungs, new APPEC Chair

What were your first thoughts and feelings when you found out about your election?

Andreas: The first thought was surprise at the result of the election, but this quickly turned into gratitude for the trust placed in me and joy at the exciting work ahead. The second thought was then directed to the excellent work of Teresa and Job in recent years with the desire and hope to carry on the very positive momentum for APPEC and continue to capitalize on it.

Katharina: When I heard that I was elected, I was very excited about the challenge of coordinating the working level of APPEC. I know that there are some big tasks ahead of us in APPEC in the next two years and I hope that with the strength of all APPEC partners we will successfully accomplish them. So I was happy and at the same time tense about the responsibility that is now coming my way.

Can you tell us a bit about yourself and your connection to astroparticle physics and to APPEC?

Andreas: As a trained particle physicist I joined the KASCADE high-energy cosmic-ray experiment in 1993 for my PhD. Since then I have been an astroparticle physicist with main and often leading activities in air-shower experiments like KASCADE-Grande, LOPES, the Pierre Auger Observatory and JEM-EUSO. The current basis of my research studies is the IceCube Observatory and since last year, I am involved in preparations for the Einstein Telescope. In all these experiments, my activities were directed always towards the whole life cycle of an experiment: From the development of suitable detectors to data analysis and making the scientific data sustainable and usable for the public. Beside the lead of a research group at KIT, I also can provide some experience in science management: I am manager of the KIT part of the Helmholtz research program “Matter and the Universe” and I serve as the elected co-chair of the German Committee for Astroparticle Physics. For APPEC I was active in the SAC between 2013 and 2017 as representative for cosmic rays. I am a member of the APPEC GA since 2018 representing KIT. 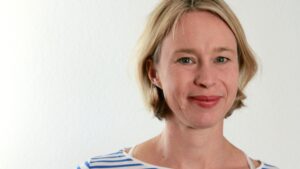 “I know that there are some big tasks ahead of us in APPEC in the next two years and I hope that with the strength of all APPEC partners we will successfully accomplish them.” Katharina Henjes-Kunst, new General Secretary

Katharina: In 2006 I started in the Technology Transfer Division of DESY for an FP 6 funded EU project (ERID-Watch1) to investigate the socio-economic impact of research infrastructures. Of course, in this tim I had contact to astroparticle physics research infrastructures, so I have visited MAGIC I in this time. Already in 2010 I became part of the EU funded ERA-NET ASPERA II for the coordination of European astroparticle physics and contributed significantly to topics like reports on research funding in astroparticle physics in Europe and several technology fora. This led to my last project, an EU project on the coordination of photosensor development in Europe (SENSE). I was coordinator of this project for three years, until it was successfully completed in 2019.
At the same time, I moved to the DESY astroparticle division and was part of a group who established a PhD school on Multimessenger astronomy (Helmholtz Weizmann Research School on Multimessenger Astronomy) and I am active in the coordination of the division, in this position I was again part of the APPEC JS during the last year.

Andreas, where do you see the most important challenge for astroparticle physics in the next years?

Andreas: Astroparticle physics is meanwhile an established field of research that encompasses a very broad spectrum of experimental and theoretical activities. In this sense spectrum refers not only to the content of the topics in astroparticle physics, but also to the variance in the size of the initiatives. Astroparticle physics ranges from small-scale experiments in laboratories to global large-scale observatories – addressing the entire range is important and necessary for overall success. Plans for large-scale global projects exist in all of our astroparticle physics domains (gamma ray and neutrino astronomy, gravitational wave research, or dark matter searches, to name a few examples) and it is a major challenge to guide and support the technological and structural developments, as well as the funding, towards these large-scale projects.

How do you see the role of APPEC, and especially the GA, to overcome this challenge?

I see the main task of APPEC on the control of the phase transition from small and medium sized experiments to large infrastructures across national borders. The selection of prioritized experiments for this transition must be scientifically sound and is the responsibility of the SAC. Only such a process ensures that the available resources are used optimally and that new possible resources can be made available. In particular, since there is no CERN, ESO, ESA or any other centre in European astroparticle physics that can perform these coordination tasks, coordination must be the responsibility of the APPEC GA.

What other topics would you like to address in the next two years?

Andreas: I see a focus of the upcoming term in the mid-term evaluation of the APPEC Roadmap with discussion of the results with the entire European astroparticle physics community and the culmination of this process, the targeted Town Meeting in Berlin in 2022. Furthermore, I see focal points of the activities in the continuation of the successful Technology Forum for synergetic work with the industry, as well as the interdisciplinary activities in the framework of JENAA. I also want to pay special attention to a structured global digitization of astroparticle physics, as well as a further strengthening of outreach, training and diversity in the research field.

Katharina, how can the Joint Secretariat support the General Assembly?

Katharina: Last year, a group of APPEC partners came together to reinvigorate the APPEC working level. Strengthening the working level must be the first step to fully support the activities that will be decided in the General Assembly. A regular consultation between Andreas Haungs and me is necessary to support the GA well. But I am sure that this will work out well – Andreas and I have already worked together very well on many projects before.

Beside this, what are the tasks you intend to work on with the Joint Secretariat?

Katharina: As already stated the first step is to reinvigorate the APPEC working level. Especially the year 2020 has shown us how important it is to be able to work in a distributed way – APPEC has established this early. I support the model of the distributed APPEC structure, with the so-called Functional Centers (FC) in different European countries. On the working level I would like to revive the Functional Centers with the support of the respective countries and establish a Joint Secretariat with more working power.
A central goal for me is to establish a successful and exciting Town Meeting in 2022 as exchange for the astroparticle physics community. The Town Meeting is intended to inform the community about the status of the implementation of the APPEC Roadmap and to provide space to discuss new developments. In the run-up to the Town Meeting I would like to encourage a Europe-wide discussion process to prepare the contents of the Town Meeting.
The support and guidance of European astroparticle physics communities in the set-up of new large infrastructures is an important task of APPEC. This is in particular relevant for the Einstein Telescope Project in the coming years which I want to specifically focus on in the coming years.
And of course, there are many, many more topics to support, just to mention all the activities which were already started with Teresa Montaruli and Job de Kleuver…

How important is the interplay and cooperation between the GA and the JS and also with third body of APPEC, the Scientific Advisory Committee?

Katharina: The APPEC SAC gives major input to APPEC – therefor the cooperation between all three APPEC bodies has to be strong. I was impressed by the report the SAC chair gave during the last GA meeting and I´m looking forward to work with the SAC on the APPEC Town Meeting and of course also all other topics.

Andreas: APPEC can only be successful if there is close interaction between the three pillars GA, JS, and SAC. This is the recipe for APPEC’s success and I look forward to a functional and lively exchange between these three bodies.

More broadly, what do you wish for the future of APPEC?

Andreas: The funding programs for astroparticle physics are very uneven throughout Europe and often embedded in larger research areas such as particle physics or astronomy. Especially for the large research infrastructures, an internationally operating network with coordination tasks is necessary. This is the broad field of action for APPEC. We need this strong body in Europe with high visibility and worldwide recognition.

Thanks to both of you and all the best for the coming two years.

And we want to especially thank the former Chair Teresa Montaruli and General Secretary Job de Kleuver for their work during the past years! 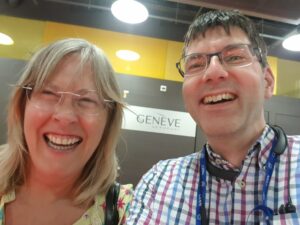 Teresa Montaruli and Job de Kleuver during an unexpected meeting at the Geneva airport.