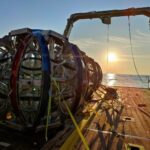 Written by katrinlink on 15th October 2021. Posted in

In September 2021 a new, very successfull sea operation at the ARCA site of the KM3NeT experiment near Sicily took place.

During this sea campaign the positioning system has been maintained by installing two acoustic beacons and recovering an exhausted one, five interlink cables were installed on the sea bottom, three new detection units were installed, i.e.: deployed to the sea bottom, connected to the submarine infrastructure, unfurled to their nominal shape (standing for almost 700 m above the sea floor) and proved to work, and the launcher vehicles of the three installed detection units and the cable trays used for deploying the cables were of course recovered, to be reused for next campaigns.

More information is available on Twitter @km3net and on the KM3NeT blog: https://www.km3net.org/category/blog/ 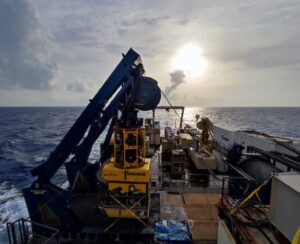 The deck of the Handin Tide at the start of the operations (note that the yellow vehicle on the left is the Remotely Operated Vehicle – ROV – to be used for underwater operations). Credits: KM3NeT 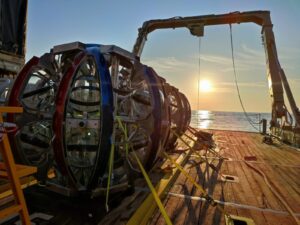 The empty deployment structures that will be reused in the future. Credits: KM3NeT