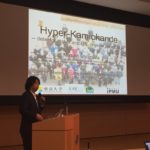 Written by katrinlink on 13th July 2016. Posted in 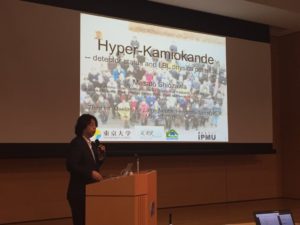 The meeting was opened by the 2015 Nobel Prize winner Takaaki Kajita who commented that “Very large-scale experiments will be needed to fully explore neutrino properties. These large-scale experiments will also naturally have astrophysics potential and increase the sensitivity of searches for proton disintegration.” He went on to note that to realise the necessary very large-scale facilities would require “… international coordination and collaboration” and defined the goals of the meeting to be to “… discuss the physics cases and global strategy, including astrophysics and proton decays, which are the part of the aim of this series of meetings; have follow-up discussions of the ICFA Neutrino Panel’s5 roadmap discussion document”6 and to discuss “… the various neutrino experiments, including Hyper-Kamiokande7, toward the realization of an efficient and productive global neutrino program.”

In this meeting, the funding-agency and laboratory representatives welcomed the important steps that had been made towards the realisation of the Hyper-Kamiokande (Hyper-K) experiment7. The international proto-collaboration has developed new, high-sensitivity, large-aperture photomultiplier tubes that substantially reduce the total project cost without unduly compromising its potential to address important questions in particle and astroparticle physics and in nucleon decay. The re-optimisation of the Hyper-K project is accompanied by the J-PARC accelerator-upgrade plan that will deliver 1.3 MW of proton-beam power on target and novel, high-performance near detectors. A recent review of the KEK Project Implementation Plan concluded that the “… J-PARC upgrade for HK is the highest priority”; already, the critical Main Ring power-supply upgrade has been approved. The two host institutes, IPNS/KEK and ICRR/UTokyo, have established a standing International Advisory Committee that has already begun to review the program in all its aspects.

T2K8, which exploits the J-PARC accelerator facility and the Super-Kamiokande (Super-K) large water Cherenkov detector, have delivered the first measurements of electron-neutrino appearance phenomena and is seeking evidence for leptonic CP-invariance violation. The Super-K collaboration has been making precise measurements of atmospheric and solar neutrinos, world leading searches for cosmic neutrinos from supernova explosions and baryon-number-violating proton-decay signals. A programme of incremental upgrade of the beam power of the J-PARC Main Ring will enhance the discovery potential of T2K, T2K phase II and, eventually, Hyper-K.

The agency and laboratory representatives were impressed by the rapid convergence of the efforts of the long-baseline, wide-band-beam community, which has developed a scientific programme based on an ambitious Long Baseline Neutrino Facility (LBNF) at Fermilab and the Deep Underground Neutrino Detector (DUNE) project9 at the Sanford Underground Research Facility (SURF)10. A rich medium-scale Short Baseline Neutrino (SBN) Program11 continues to be developed at Fermilab. The SBN Program, which encompasses the SBND12, MicroBooNE13 and ICARUS14 experiments, seeks to test the light-sterile-neutrino hypothesis and contribute to the development of liquid-argon-TPC technology. This year MicroBooNE started to take data, launching the SBN Program. The DUNE collaboration now consists of more than 850 scientists and engineers from over 149 institutions in 29 countries around the globe.

Significant milestones met in the last year include the creation of the DUNE collaboration, its governance and DUNE’s scientific and technical specification, the endorsement of the LBNF/DUNE programme in two DOE critical design reviews, the approval of the LBNF/DUNE conceptual design and the agreement that excavation for LBNF will start in 2017. The excellent progress in the development of proton beam-power at Fermilab through the Proton Improvement Plan15 and the strides taken in the “ProtoDUNE” programme which will demonstrate the feasibility of large-scale liquid-argon (LAr) TPCs read out using the single-phase (SP) and double-phase (DP) techniques were noted.

The CERN Neutrino Platform16 is a welcome structure to foster the active involvement of Europe and CERN in the U.S. and Japanese neutrino infrastructures. Six projects have now been approved, including refurbishment of ICARUS to be the far detector for the SBN Program at Fermilab, two large-scale prototype detectors for DUNE, and a future muon spectrometer for T2K. Much of this work is underpinned by agreement on the CERN contributions to the Fermilab SBN and LBNF/DUNE programmes.

The importance of the complementarity between Hyper-K and DUNE6 was reconfirmed. Each experiment has been optimised for the measurement of electron-neutrino appearance at the same L/E but at baselines, L, and neutrino energies, E, that differ by almost a factor of 5. The longer baseline will allow LBNF/DUNE to determine the mass hierarchy. DUNE and Hyper-K apply different detection techniques, which are matched to the relevant neutrino-energy spectrum, to deliver comparable sensitivities in the search for CP-invariance violation. Both detectors will accumulate large atmospheric-neutrino samples that will enhance the measurement of standard-neutrino-model parameters and allow the study of neutrino astrophysics including solar-neutrinos and supernova-neutrinos. DUNE and Hyper-K have complementary sensitivity to proton decay.

The agency and laboratory representatives were also impressed by the conceptual and technical progress of the reactor-based liquid-scintillator experiments, JUNO17 and RENO-5018, which have the potential to determine the mass hierarchy and to make precise measurements of a complementary set of oscillation parameters. Ice at the South Pole (PINGU)19, sea-water in the Mediterranean (ORCA)20, and the Iron Calorimeter (ICAL) at the India Neutrino Observatory (INO)21 can also enhance the potential of the accelerator-based neutrino-oscillation programme using atmospheric neutrinos. The complementarity of these large liquid-scintillator/underwater/ice detectors to Hyper-K and DUNE was welcomed.

There is a diverse physics program in the development of both single-beta-decay measurements and neutrino-less double-beta-decay measurements, which explore the region of parameter space in which neutrino masses are degenerate. The ambitious goal for the neutrino-less double-beta decay programme over the next decade is to deliver the sensitivity necessary to cover the inverted-mass-hierarchy region. Achieving this goal will require the enrichment of samples of the relevant isotopes and ton-scale detectors, thereby boosting the size of the experiments. Further international cooperation will be valuable in the development of the technologies required to deliver this ambitious experimental programme.

The agency and laboratory representatives noted that the precision of cosmological constraints on the total mass of neutrinos continues to improve and provides important and complementary constraints by measuring the influence of neutrinos on the growth of structure in the Universe. Future cosmic surveys, such as DESI, LSST, Euclid, WFIRST and CMB S4, will further improve these constraints.

The ICFA Neutrino Panel presented its recent roadmap discussion document6. The funding-agency and laboratory representatives took note of the Panel’s interim recommendations and endorsed the peer-group- and stakeholder-consultation process by which the Panel proposes to finalise its roadmap. The document provides a welcome platform for the discussion of the full exploitation of the present programme, the evolution of the long-baseline LBNF/DUNE and Hyper-K programmes and the development of the hadro-production and cross-section measurement programmes necessary to maximise the overall scientific output. The Panel’s report also sets in context long-term opportunities such as the Neutrino Factory and ESSnuSB. The Panel has identified a decision point at around 2020 when the future of the sterile-neutrino search and cross-section measurement programmes can be defined and recommends that experiments such as nuSTORM and IsoDAR be evaluated in preparation for the decision point.

The agencies and the laboratory directors thanked the ICFA Neutrino Panel and the IUPAP Astroparticle Physics International Committee (APPIC) for organising the meeting. The 4th International Neutrino Meeting on Large Neutrino Infrastructures will take place in Europe in 2017.