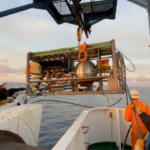 Next step in the deployment of the KM3NeT/ORCA detector

Written by katrinlink on 1st December 2020. Posted in 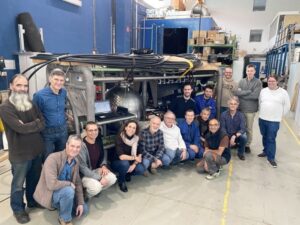 The CPPM team next to the junction box. Credits: KM3NeT 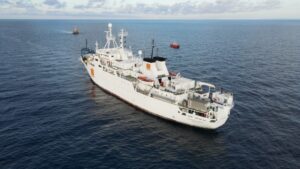 Another KM3NeT/ORCA detector deployment campaign in the Mediterranean was brought to a conclusion in October 2020. A second junction box (JB) has been successfully connected to the KM3NeT/ORCA seafloor network. The JB was deployed to within a metre of its nominal position at a depth of 2450 m.
The JB provides the power to the Detection Units (DUs) and distributes/collects the optical fibres used for the data transmission. The main electro-optic cable (MEOC) provides the input power on a single conductor at 3300 VAC which is transformed in the JB to 400 VAC to power the DUs. The power return is via the sea. The JB provides eight wet-mateable output connectors to which the DUs or Earth and Sea Sciences instrumentation (ESS) are connected via so called interlink cables. Four DUs are daisy chained to a single connector, so a single JB can connect up to 32 DUs. The JB was in fact ready since spring 2020 but due to COVID restrictions its connection was delayed until now.

The final configuration of the KM3NeT/ORCA site: N2 is the new junction box. Cable 2 will be the relocated ANTARES MEOC. MII, BJS, NSVT are earth and sea science instrumentation. Credits: KM3NeT 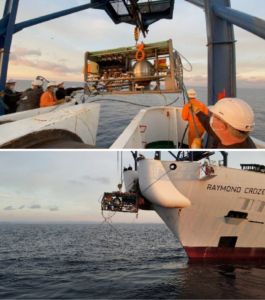 During the sea operation one end of the output MEOC was transferred from the Castor to the Raymond Croze for jointing (first time we have done that) and then the Castor lowered the output cable in synchronisation with the lowering of the JB. All in all, three joints were made; each joint requiring the splicing of up to 36 optical fibres and taking about 24 hours including encapsulation and X-ray control of the joint. We also had a weather standby of 36 hours.

The connection of the new junction box doubles the capacity of the ORCA seafloor network to connect DUs. In order to complete the ORCA sea floor network two more JBs will be needed; these will be connected to the MEOC currently being used by ANTARES telescope, once it is decommissioned and the extremity of the MEOC rerouted to the KM3NeT/ORCA site.

A short drone video of the deployment part of the sea operation can be viewed here.