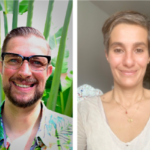 Written by katrinlink on 20th October 2021. Posted in

Interview with Akira Ohnishi, Laura Fabietti, Philip von Doetinchem, and Alexander Kalweit on the JENAA-EoI on Nuclear Physics at the LHC

Akira Ohnishi, Philip von Doetinchem, Laura Fabbietti and Alexander Philipp Kalweit formed an initiative on Nuclear Physics at the LHC in response to the JENAA call for EoI.
This topic is of interest to all three communities, particle, astroparticle and nuclear physics. Hyperon-nucleon and hyperon-hyperon interactions can be studied with high precision, and these results are fundamental for the study of the equation of state of neutron stars. For the search for dark matter in cosmic rays, the physics of the formation of light antinuclei, like antideuterons and antihelium nuclei, plays an important role and is thus of particular interest for the astroparticle physics community.
In this interview they tell us more about the aims and activities of this initiative.

How are the four of you connected with the three JENAA communities?

Philip: I am an astroparticle physics researcher with a focus on cosmic antinuclei detection for the purpose of using them as messengers for new physics light antinuclei. These subjects are closely connected with each other, and can be studied in the terrestrial experiment, LHC-ALICE.
Laura and Alexander: We are both working in the ALICE experiment at CERN and we are excited about the fact that measurements at the LHC have a direct impact on astrophysical questions.
Akira: I am a theoretical nuclear physicist and have communicated with Laura on the hyperon-nucleon interactions, and I am also interested in the neutron star matter equation of state.

How did you come up with the idea of a common EoI?

Akira: The ALICE members (Laura and Alexander) organized an interdisciplinary unit including Philip and myself. One of the papers on hyperon-nucleon interactions is published in Nature, and we find that our subjects are attracting broad interest.
Philip: Looking at the current status of particle astrophysics it is clear that the interpretation of the cosmic-ray data itself will benefit strongly from improving nuclear production and interaction cross sections. Therefore, a collaborative effort across different disciplines is essential to make the most out of existing and future data.

What are the aims of your initiative?

The kick-off Meeting for your initiative took place almost one year ago. How did you proceed after this?

Akira: I have joined the ALICE collaboration as an associate member. Two papers from the ALICE collaboration including me are in preparation. I also submitted two papers (not from ALICE) on the correlation functions. One is the hadron-deuteron correlation function and the other is the femtoscopic study of NΞ – ΛΛ coupled channel potential. One of the great advances in the ALICE papers (in prep.) including me is the extension of the scope to hadrons with a charm quark. As the first work, we are preparing a paper on D– p correlation function paper. Since there have been no experimental works on the charmed-hadron interaction with nucleons, I think that this is a breakthrough. I have contributed to the paper on providing predictions from some of the theoretical interactions.
Philip and Laura: Our groups started collaborating on a new cosmic antideuteron study that specifically focuses on integrating all new collider data for antideuteron production and interaction in the Galaxy in a consistent way.

What are the next steps?

Philip: It is planned to organize a strategy meeting in 2022 to develop a concrete vision of what this initiative wants to accomplish in the next 5, 10, 20 years. We are currently just opening the door to cosmic antinuclei physics and it will be a significant effort from the current status to a precision understanding of sources and propagation of cosmic antinuclei. The impact of these studies has transformative potential for the fields of cosmology and dark matter physics.
Alexander: At the LHC, the next big data taking campaign — the so-called Run 3 — is just about to start with a fully upgraded ALICE detector that will allow significantly higher data taking rates. Especially the antinuclei measurements, that are very statistics hungry, will profit enormously from that.
Akira: In order to solve the hyperon-puzzle of neutron stars, understanding the three-body force including hyperons is decisive. Since the two-body Λ-nucleon potential (relatively well-known from hypernuclear physics) leads to a soft equation of state which cannot support two-solar-mass neutron stars. Thus we need repulsive three-body forces including hyperons, early transition to quark matter, or modified gravity (modification of general relativity) to solve the hyperon-puzzle. It may be possible to probe three-body forces from the three-body correlation functions. While the theoretical formulation has not been developed, it can be a great achievement if three-body forces including hyperons are obtained from correlation function studies. Another step is the hadron-hadron interactions including heavy-quarks. Hadron physics including charm and bottom quarks is rich and very interesting. A lot of exotic hadrons including heavy-quark(s) have been observed and are attracting the attention of many researchers. However, hadron-hadron interactions involving heavy-quarks have never been confirmed experimentally. If achieved, femtoscopic studies of hadron-hadron interactions with heavy-quarks will provide the first systematic database and will contribute to the non-perturbative QCD physics.

How could NuPECC, ECFA and APPEC support your activities?

Akira: Well, in the future, some international workshops/symposia may be held and supported by the initiative. We may hope to give young researchers awards in those meetings, and may ask the consortiums to support the awards.
Alexander: The large physics potential of these truly interdisciplinary studies is sometimes not fully recognised, because they do not fall into existing categories, e.g. in funding agencies or when submitting abstracts for large conferences. Therefore already publicising our physics via interviews like this one or in newsletters and journals helps us a lot.