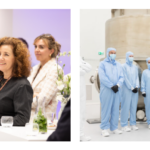 Opening of ETpathfinder in Maastricht

Written by katrinlink on 17th December 2021. Posted in

On 8 November ETpathfinder was opened in Maastricht in a festive ceremony by the demissionary Minister of Education, Culture and Science of the Netherlands Ingrid van Engelshoven. ET pathfinder serves as a testbed to develop new technologies for future gravitational wave detectors, in particular the Einstein Telescope (ET).

The ETpathfinder is built at Maastricht University involving several European institutions as explained by Stefan Hild, project leader of ETpathfinder: “We started ETpathfinder with 15 partners from the Netherlands, Belgium and Germany. Universities and research institutes from France, the UK and Spain have since started to contribute as well. It is great to see all this international expertise come together here in our facility.”

The facility is a huge cleanroom where various kinds of laser interferometers can be set up over the next 20 to 30 years. Despite several towers which contain all kinds of equipment there are ‘arms’ consisting of vacuum tubes of 20 meters long. Although they are too short to actually measure gravitational waves they are sufficient for the development and testing of different kinds of technologies and their interplay. This includes for example new cooling techniques, mirror coatings and lasers, which will be developed together with high-tech companies. The resulting innovations are expected to find other uses in industry as well.

The construction of ETpathfinder in Maastricht strengthens the border region’s position as a candidate location for the the Einstein Telescope and is an important asset to science in Netherland as stated by van Engelshoven: “We strengthen both the development of large-scale scientific infrastructure and the ambition to conduct fundamental research. I am pleased that I was able to contribute to this instrument together with the other partners.”

Read more about ETpathfinder and the opening ceremony here: https://www.nikhef.nl/en/focusblokken/looking-back-at-the-opening-of-etpathfinder/