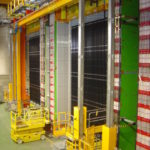 The OPERA experiment, located at the Gran Sasso Laboratory of the Italian 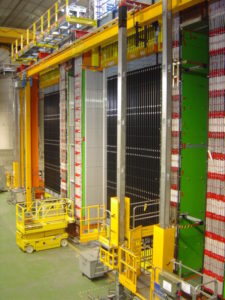 View of the OPERA detector (on the CNGS facility) with its two identical Super Modules, each one containing one target section and one spectrometer (Credit: CERN)

National Institute for Nuclear Physics (INFN), was designed to conclusively prove that muon-neutrinos can convert to tau-neutrinos, through a process called neutrino oscillation, whose discovery was awarded the 2015 Nobel Physics Prize. In a paper published today in the journal Physical Review Letters, the OPERA collaboration reports the observation of a total of 10 candidate events for a muon to tau-neutrino conversion, in what are the very final results of the experiment. This demonstrates unambiguously that muon neutrinos oscillate into tau neutrinos on their way from CERN, where muon neutrinos were produced, to the Gran Sasso Laboratory 730km away, where OPERA detected the ten tau neutrino candidates.

Today the OPERA collaboration has also made their data public through the CERN Open Data Portal. By releasing the data into the public domain, researchers outside the OPERA Collaboration have the opportunity to conduct novel research with them. The datasets provided come with rich context information to help interpret the data, also for educational use. A visualizer enables users to see the different events and download them. This is the first non-LHC data release through the CERN Open Data portal, a service launched in 2014.

“We have analysed everything with a completely new strategy, taking into account the peculiar features of the events,” said Giovanni De Lellis Spokesperson for the OPERA collaboration. “We also report the first direct observation of the tau neutrino lepton number, the parameter that discriminates neutrinos from their antimatter counterpart, antineutrinos. It is extremely gratifying to see today that our legacy results largely exceed the level of confidence we had envisaged in the experiment proposal.”