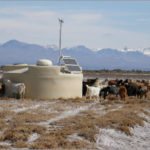 Pinning-Down the Sources of the Highest-Energy Cosmic Rays

Written by katrinlink on 9th October 2020. Posted in

The Pierre Auger Collaboration has reported a measurement of the spectrum of cosmic-rays above 2.5 x 1018 eV made with unprecedented precision. A new spectral feature has been identified just above 1019 eV which is found to be independent of the direction from which the particles arrive. Taken together, the observations exclude the hypothesis that the highest-energy cosmic-rays come from a small number of nearby sources and that protons dominate in the particle beam. 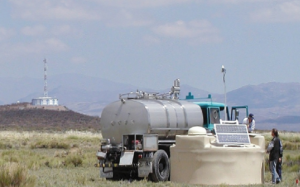 One of the water-Cherenkov detectors (foreground) being filled with water. A fluorescence-detector station can be seen about 1500 m away on the hill in the background. An antenna at the Cherenkov detector is used to send data to another on the mast at the fluorescence station. Signals are then sent to the control room of the Observatory, 10 km away.
Credit: Pierre Auger Observatory

The existence of cosmic rays, dominantly the nuclei of atoms, with energies above 1019 eV has been known for over 60 years but limited data have allowed speculations on their origins to range freely. While it has long been thought that the sources of these particles must lie outside our galaxy, it is only recently, through the work of the Pierre Auger Collaboration, that this hypothesis has been confirmed experimentally1 with the demonstration of a modulation in right ascension of the arrival directions of events with energies above 8 x 1018 eV. Specifically, the first harmonic is 4.7 ± 0.8 % with the maximum of the effect in a direction nearly 180° from that of the galactic centre. The amplitude increases with energy. Our understanding of the birthplaces of these particles has now been further improved through measurements of the energy spectrum of ultra-high energy cosmic rays (UHECR) recently reported2 by the Collaboration and highlighted in APS Physics3. The results are derived from an unrivalled sample of over 215,000 events with energies above 2.5  x 1018  eV.

Properties of UHECRs are deduced by studying the cascades of electrons, photons and muons, usually called extensive air-showers, created by the impacts of high-energy nuclei on the atmosphere. At 1019 eV, where the flux is around 1 particle per km2 per year, a single nucleus generates ≈1010 particles spread over about 25 km2 at ground-level. At the Auger Observatory such showers are detected using an array of 1600 water-Cherenkov detectors deployed on a 1500 m triangular grid covering 3000 km2. Arrival directions are measured with a precision of ≈ 1°. The array is over-looked from four stations, each containing six telescopes that are used to detect fluorescence light produced by the excitation of nitrogen as the shower traverses the atmosphere. A calorimetric estimate of the energy for the ≈ 10% of events recorded on moonless nights is thus possible. In the picture a single Cherenkov detector and one of the fluorescence stations are shown.

The Auger measurements are unique as methods have been developed to enable the energy of each particle that initiates a cascade to be determined independent of assumptions about primary mass or of knowledge of the hadronic processes that control the cascade, many of which are at energies well-beyond that reached at the LHC. This is achieved by using the sub-set of events detected simultaneously with the fluorescence and water-Cherenkov detectors to provide a calibration. The energy resolution improves from ≈ 20% at 1 x 1018 eV to ≈ 7% one decade higher.

The energy density of UHECRs as a function of energy is shown in the plot below. The two well-established features, the ankle at 5 x 1018 eV and the steepening above 4 x 1019 eV, are clearly evident. In addition, a new feature at   ≈ 1.3 x 1019 eV has been identified. A long-standing and popular framework to explain the observations has been that UHECRs are from sources distributed universally throughout the Universe that accelerate only protons. Both the ankle and the steepening features would then be explicable by energy losses of these protons through interactions with the photons of the cosmic microwave background. However, not only are our results on mass composition4 in strong tension with a pure proton composition around and above the ankle energy, but also the new feature, absent from the popular framework, rules out such a pure-proton paradigm. Further, the attributes of all three spectral features are found to be independent of the declination band from which events arrive. Thus, from this observation, the hypothesis that the new feature could stem from the distinctive spectrum of a local source that emits only protons and contributes significantly to the total intensity is also disfavored. 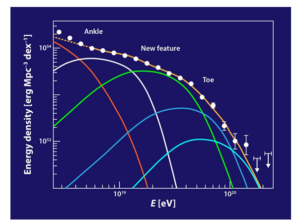 The energy density in cosmic rays as above 2.5 x 1018 eV. A new feature has been identified in the spectrum between the ankle, where the spectrum flattens at ≈ 5 x 1018 eV, and the place where it steepens sharply above ≈ 4 x 1019 eV. An illustrative comparison of estimates of the fluxes of different nuclei at the top of the atmosphere, deduced from the model discussed in the text, is indicated by the coloured lines: protons (red), helium (white), CNO group (green), Si (blue) and Fe (cyan).
Credit: APS/Alan Stonebraker; adapted from A. Aab et al. (Pierre Auger Collaboration), Phys. Rev. Lett. 125, 121106 (2020)

By contrast, our results better fit a scenario in which several nuclear components contribute to the total intensity and in which the electromagnetic fields permeate source environments where nuclei are accelerated to a maximum energy proportional to their charge. The best reproduction of data by simultaneously fitting the energy spectrum and our estimate of the mass composition is shown in the plot above. In this framework, the steepening results from the combination of the maximum energy of acceleration of the heaviest nuclei at the sources and their photodisintegration around 5×1019 eV when colliding the background photon fields permeating the extragalactic space (the GZK5 effect). The steepening at ≈ 1019 eV reflects, on the other hand, the interplay between the flux contributions of the helium and carbon-nitrogen-oxygen components injected at the source with their distinct cutoff energies, shaped by photodisintegration during the propagation. To make up the all-particle spectrum below the ankle energy, as well as to fit the composition data, an additional component is further required, the origin of which remaining to be uncovered.

Above 5×1018 eV, the energy content of UHECRs in every cubic Mpc inferred from our data is ≈ 5.6×1053 erg, corresponding to about 1/4th of a solar mass. To supply this energy content, the luminosity density that sources emitting continuously must inject into extragalactic space as UHECRs can be constrained to ≈ 6×1044 erg Mpc−3 yr−1 above 5×1018 eV at a redshift of zero. Classes of extragalactic sources that match such rates in the gamma-ray band include active galactic nuclei and starburst galaxies. The flux pattern from these objects also provides an indication of anisotropy in UHECR arrival directions6.

The Auger Collaboration has devised an upgrade of the extensive air-shower array with scintillators installed above the water-Cherenkov detectors. This enhancement will enable concomitant measurements of the electromagnetic and muonic components, the combination of which yields the principal mass-sensitive observable for such instruments. Obtaining more information on the composition of cosmic rays at the highest energies is crucial to pinning-down the origin of the observed flux features.