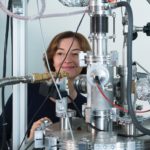 Written by katrinlink on 12th March 2018. Posted in 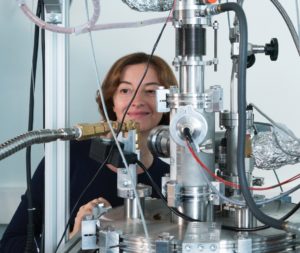 1) Your current position, field of activity and specific research interests
I’m a professor of experimental physics at the Physik Institut of the University of Zurich. My field of research is astroparticle physics, in particular I’m interested in the nature of the dark matter in our galaxy, and in the nature and absolute mass of neutrinos.

3) What was the major challenge(s) for you in your career? Were any of these challenges gender-related?
Most likely I went through the usual set of challenges when one pursues a career in science, in a highly competitive field. Probably one of the major defining factors was to succeed in experimental physics, for in high school and even during the first two years at the university my main interests were in pure mathematics, and in computing. I wanted a family, children and a career in science, this was quite clear from the very beginning. But I never saw this as a gender-related challenge. I grew up in a household where both parents had a career, and shared the care and education of their three children equally. I could not imagine it otherwise.

4) How easy do you think is for young talented scientists to develop a successful career today?
I think it is not harder or easier than in the past. Talent is necessary, but not sufficient. Passion, courage, perseverance, dedication and focus are as mandatory for young scientists today as ever.

5) Is it difficult for female researchers to reach a leading position in comparison to their male colleagues in this field?
There aren’t many female researchers in leading position, albeit their number is growing. I have no overall recipe on how to improve the situation; I believe it is due to a combination of many factors: the way science is taught in schools, the regard of science in the society as a whole, the role of female researches in their own families. The implicitness that I just mentioned, that females and males jointly work towards their career, and equally share the work related to children and a household – it seems not to be widely established, not even in the 21st century.

6) What suggestions would you have for young women who would like to follow a similar career path as yours?
If they want to succeed, they must choose a subject that they are genuinely passionate about. An academic career demands not only scientific curiosity and hard work, but also passion, flexibility, mobility and the ability to learn from ones failures. Most importantly, they must have the confidence that “a life in science” can be compatible with many lifestyle choices, including having a family.