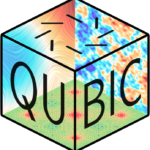 The quest for B-mode polarization of the Cosmic Microwave Background (CMB) is one of the major challenges of observational cosmology. A positive detection would signify the presence of primordial gravitational waves, theoretically expected from the inflation era. This is one of the most difficult measurements to make because the expected signal is very small and requires highly sensitive instruments with little systematic bias and with wide frequency coverage in order to separate the primordial signal from the foreground. 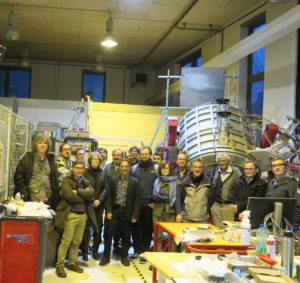 The QUBIC collaboration meeting of November 2019 at APC. Credits: QUBIC

QUBIC (QU Bolometric Interferometer for Cosmology: http://qubic.in2p3.fr) is an instrument based on a new concept called bolometric interferometry. The objective of QUBIC is to search for the B-mode polarization constructed from the Q and U modes (the two Stokes parameters describing the shape of the polarization ellipse of the microwave radiation). QUBIC combines the advantages of very sensitive and wide band cryogenic bolometers with the precise control of systematic instrumental effects possible with an interferometer, giving also the added capability of spectroscopic imaging. The original idea dates back to the early 2000s and, since then, European physicists have played a leading role in the development and exploitation of this innovative technology. After some initial projects, the QUBIC collaboration was created in 2008. New technical developments in European laboratories have enabled the creation of advanced detectors. 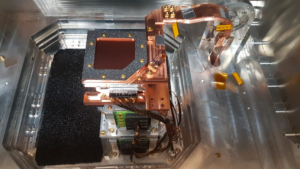 The technological demonstrator (TD), identical to the nominal instrument but with fewer detectors and interferometry channels, smaller mirrors and without dichroic filter, was integrated at APC, Paris, in 2018 and underwent a test phase throughout 2019. It is intended to be installed at the QUBIC site at an altitude of 4800 m in the province of Salta in Argentina. Built by French, Italian, Irish, British and Argentinian laboratories, the technological demonstrator of QUBIC passed, in January, a review requested by the IN2P3-CNRS with the participation of the INFN. The review highlighted the innovation of the technical demonstrator as the first ever bolometric interferometry telescope and its potential for cosmology.

In the synthesis of the scientific presentations of the review group, which included international experts, the following evaluation was given on the general context of QUBIC:

“The interferometric nature of the synthesized beam results in a change of its multiply peaked pattern as a function of EM wavelength. Consequently, QUBIC would have sensitivity to space patterns on the sky as well as to their EM spectrum. QUBIC is therefore designed as a spectro-imager capable of measuring up to 5 sub-bands in each of our physical bands providing extra EM spectrum resolution with respect to traditional imagers. This unique feature could be a game-changer in the current context of a strong limitation to primordial B-mode observations from foregrounds (dust, synchrotron) whose spectral behaviour is not known and could significantly depart from a power-law (which is usually assumed in any component-separation so far). 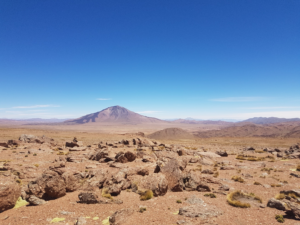 The target QUBIC installation site will be on the La Puna plateau in Argentina at 4800 m altitude. This site is an excellent compromise between the atmospheric conditions (humidity, stability) similar to that of the neighbouring Atacama and little degraded compared to a site in Antarctica and secondly a possible accessibility almost all year long, incomparable to that of an Antarctic site.”

In the general remarks of the conclusions, the progress made over the past two years is considered impressive. The demonstrator is assessed as convincing and successful, since the concept’s polarization and spectroscopy capabilities have been found to be excellent and in particular, the spectroscopic feature is of utmost utility for foreground characterization and analysis. 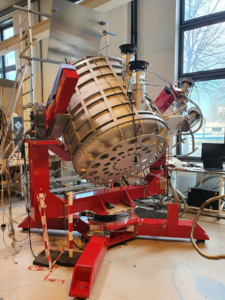 Several instruments installed on various sites are already measuring the CMB in search of the B-mode signal. The strength of this signal is summarized by the ratio “r” between the amplitudes of the tensor and scalar modes of perturbation of the metric of the primordial Universe. As the PI, Jean-Christophe Hamilton, explains, QUBIC’s sensitivity and statistics, once operational, will be lower than some of the running experiments. Nevertheless, QUBIC’s novel approach to systematic effects and to the foreground subtraction could be decisive for the discovery or confirmation of the extremely weak expected signal. QUBIC’s new technology aims to be integrated into next generation large detectors through a multi-year deployment and sensitivity enhancement program.

Regarding the current phase of QUBIC, Aniello Mennella, system scientist, says that the next steps envisaged are the finalization of the tests at APC, the shipping of the TD to Argentina and the commissioning on the sky (which will suffer delays due to the health crisis unfortunately). Following the upgrade to the complete instrument which will improve the sensitivity, there will be an observing campaign of 2 years leading to an estimate of sigma(r) = 0.01, corresponding to the sensitivity of Stage III instruments in the terminology of the CMB community.

In the longer term, potential future developments of QUBIC are already envisaged in order to reach Stage IV sensitivity (sigma (r) = 0.001) within a few years. These include:

It should be reminded here that the coordination of European laboratories for the development of the burgeoning field of experiments for Stages III and IV has appeared necessary since some years. APPEC has contributed to global coordination of this field through the Florence CMB Workshop series that started in 2015 and that helped incubate multiple European initiatives for contributing to CMB Stage IV. Information and links are available from the last meeting https://indico.in2p3.fr/event/19414/overview 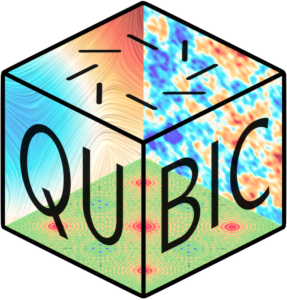