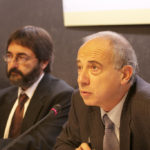 Written by katrinlink on 31st August 2016. Posted in 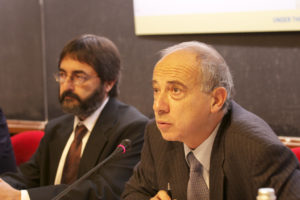 He studied physics under Nicola Cabibbo at the University of Rome La Sapienza and went on to work at CERN as a fellow, and from 1979-1986 as a CERN staff member. He was a visiting professor at École Normale Superieure in Paris, Max Planck Institute, Munich, and Boston University. In 1987, he became professor of theoretical physics at University of Rome Tor Vergata. He was appointed president of INFN in 2004, holding the role for seven years.

Roberto, mainly in collaboration with some of the most prominent representatives of the “Rome Theory Group”, Cabibbo, Luciano Maiani, Guido Altarelli, and Guido Martinelli, gave very relevant contributions to the study of various aspects of particle phenomenology, in particular in the field of strong interactions.

Roberto was a champion of the SuperB accelerator project – a B-factory intended to cover a 1.3km loop in the Rome/Lazio area. Ultimately the project could not be hosted in Italy, but the technology he worked on was implemented in Japan. He also worked on the development of INFN’s supercomputer capability – the INFN Array Processor Experiment – to design and construct high performing computers for quantum chromodynamics calculations. Roberto’s work resulted in 190 published papers and books, with more than 11,000 citations.

Luciano Maiani, chair of the International Centre for Theoretical Physics, said: “A fine mathematical mind, Roberto never lost sight of the relationship that goes between theory and experiment and was able to suggest meaningful experiments himself, to test delicate aspects of the theory. For this, he was widely appreciated a respected.”

Antonio Masiero, chair of the APPEC Scientific Advisory Committee, said: “Roberto often emphasized the need for European astroparticle physics to find a natural centre of gravity, as particle physics did so naturally at CERN as its major laboratory. He was determined for APPEC to fill that coordinating role for astroparticle physics, and his commitment to the growth and development of the discipline was central to his presidency of INFN.”

Roberto suffered a stroke in 2014, and was forced to retire through poor health in 2015. He passed away in hospital in Rome. His influence on APPEC will last long into the future.