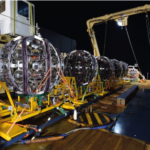 Written by katrinlink on 21st April 2021. Posted in

During a week-long sea campaign, 8-14 April 2021, the seafloor infrastructure offshore Sicily has been successfully upgraded. In addition, five new detection units of the kilometre cube neutrino telescope KM3NeT/ARCA have been connected and are operational.

Located in the Mediterranean Sea at a depth of 3500 m, about 80 km offshore Capo Passero, Sicily, the ARCA telescope together with its sister detector ORCA, located offshore Toulon, France will allow scientists to identify the astrophysical sources of high-energy cosmic neutrinos and to study the fundamental properties of the neutrinos, the most elusive and pervasive of the known elementary particles. The two detectors will also provide unprecedented opportunities for Earth and Sea science studies.

Once complete, the KM3NeT/ARCA detector will form an array of more than two hundred detection units. Each of these 700 m tall structures comprises 18 modules equipped with ultra-sensitive light sensors that register the faint flashes of light generated by neutrino interactions in the pitch-black abyss of the Mediterranean Sea.

During the first part of the sea operation, a new junction box, a hub for the power distribution and data transmission of the detection units, was added to the sea floor infrastructure. The junction box is connected via an electro-optical cable to the recently renovated onshore INFN laboratory located in Portopalo di Capo Passero.

In the second part of the operation, five new KM3NeT detection units were deployed, individually connected by a remotely operated submersible to the junction box and unfurled to their final vertical configuration. As a final step, the first detection unit of the apparatus, which had been deployed as early as 2015, was connected to the new junction box.

KM3NeT is an international collaboration of over 250 scientists from more than fifty scientific institutes around the World. KM3NeT has been included in the list of high priority projects selected by the European Strategy Forum on Research Infrastructures (ESFRI). Paschal Coyle, Spokesperson of the Collaboration emphasises: “The successful deployment and operation of multiple ARCA detection units is another major step forward for the KM3NeT project. Now it’s full steam ahead with the construction of the hundreds of detection units to be deployed at the French and Italian sites.” 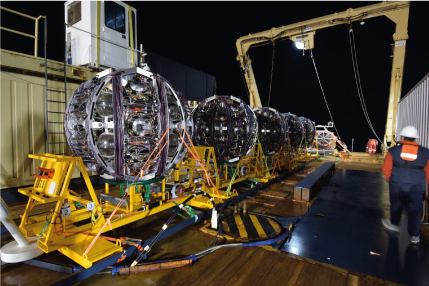 The five detection units of KM3NeT onboard the deployment ship. (Credits: KM3NeT) 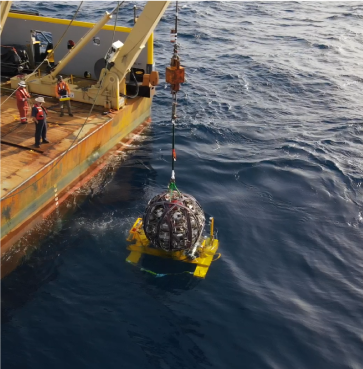 Deployment of a detection unit of KM3NeT. (Credits: KM3NeT)