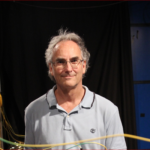 KM3NeT is growing – Recent deployment in the Mediterranean Sea

Interview with Paschal Coyle on the recent deployment campaign for KM3NeT

During the last month Paschal Coyle and his colleagues from the deployment team were busy installing additional Detection Units (DUs) in the Mediterranean Sea.
The most recent campaign was from 29th of June until 1st of July 2019 and since then the KM3NeT/ORCA deep-sea neutrino detector is continuously taking data with its first four neutrino detection units.

What is the current status in the two KM3NeT sites, in front of Toulon and Capo Passero?

KM3NeT is an ESFRI roadmap project aimed at constructing a neutrino telescope with sites in France and Italy. The project has the dual goal of high-resolution, multi-flavour neutrino astronomy and the study of neutrino oscillations in the GeV range to establish the neutrino mass ordering.
After some delays related to issues with the seafloor network, four DUs are now operational at the French site. The Italian site also hosts one operational DU, which has been working now for 3 years. The data from the first DUs have provided an important validation of the KM3NeT technology. In particular, we have demonstrated the capability to precisely position (less than 1 m) the detection units on the seafloor and measure the real-time position of the optical modules to a few centimetres using the acoustic positioning system. We have also confirmed that we can determine in real-time the in-situ time/gain/efficiency calibrations based on signals from the radioactive decays of the potassium isotope 40K present in the seawater. Combining data from both the ARCA and ORCA detectors we have recently published the depth dependence of the atmospheric muon flux over a depth of more than one kilometre (arXiv:1906.02704). At the ICRC 2019 conference we will present our first detection of atmospheric neutrinos with these DUs.

What are your future milestones?

With the advent of recent new funding in France, Italy and the Netherlands, the Collaboration currently has the means to build a total of about 100 DUs, along with the seafloor infrastructure to accommodate more DUs. At this moment, the optical modules for 20 DUs have been assembled; these will be deployed at the Italian site once refurbishment of its sea floor network will be completed summer 2020.
With several optical module and detection unit construction sites across Europe, the completion of the 115 (230) DUs for the French/ORCA (Italian/ARCA) sites could be achieved in 2024(26), assuming timely availability of the full funding. The Collaboration has also started the process to set up a legal entity in the form of an European Research Infrastructure Consortium (ERIC). 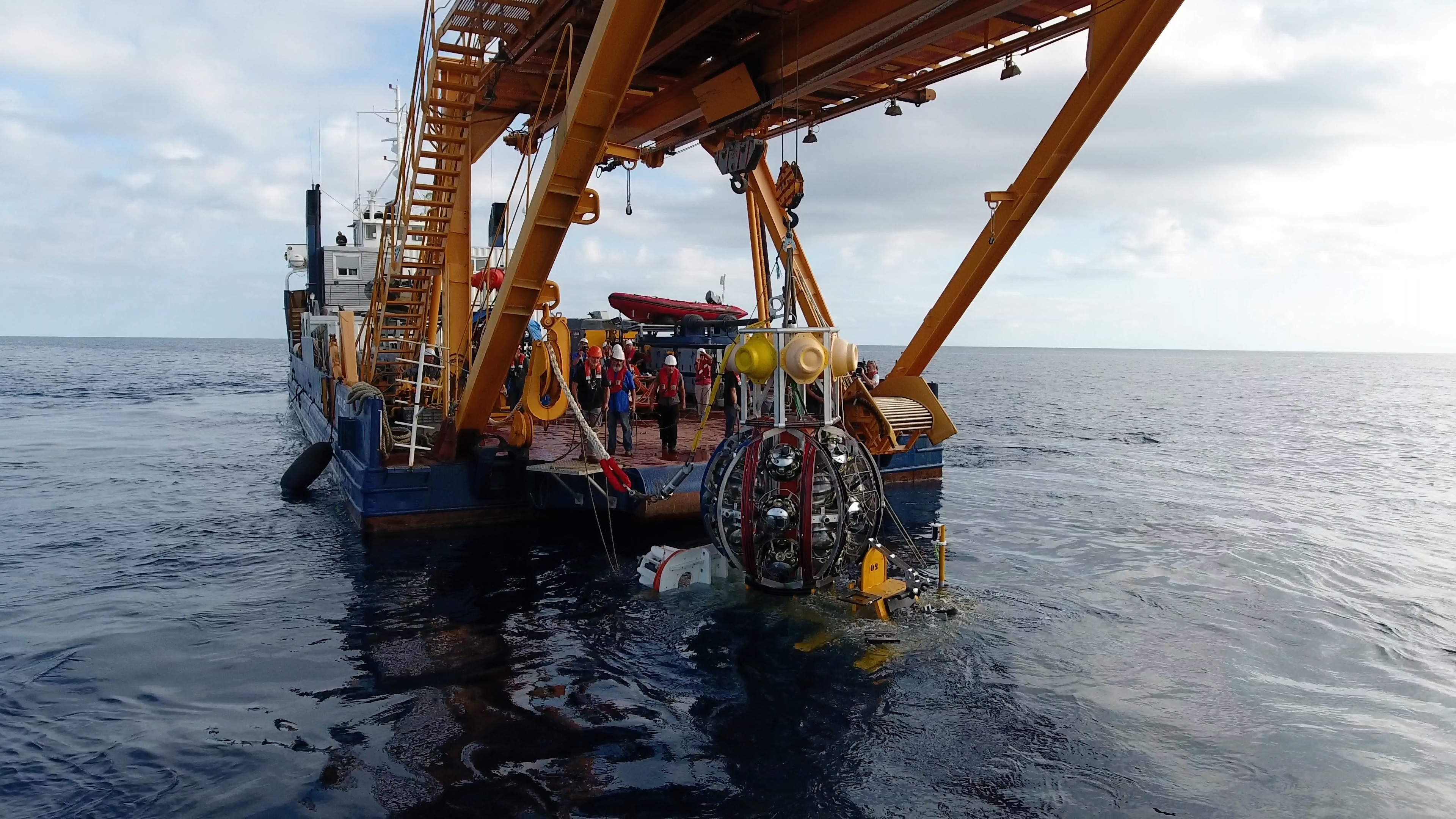 Deployment of the furled detection unit.

KM3NeT is an infrastructure that can be used in other fields of science– tell us about those activities.

The KM3NeT research infrastructure is also a cabled deep-sea marine observatory and will provide open access to instrumentation from the Earth and Sea science community. Until now, measurements in the deep sea are typically performed by deploying and recovering autonomous devices that record data over periods of months to years. This method is severely constrained by bandwidth limitations, by the absence of real-time interaction with the measurement devices and by the delayed access to the data. A cabled observatory like KM3NeT remedies these disadvantages by essentially providing a power socket and high bandwidth Ethernet connection at the bottom of the sea. This is an important and unique opportunity for performing deep-sea research by scientists from the fields of marine biology, oceanography, environmental sciences and geosciences. To this end, both the French and Italian KM3NeT sites are nodes of the European Multidisciplinary Seafloor and water column Observatory (EMSO).
For example, an EMSO sea science instrumentation module was recently connected to the KM3NeT-France infrastructure. This module hosts sensors that provide real-time monitoring of a plethora of environmental parameters including temperature, pressure, conductivity, oxygen concentration, turbidity and sea current. Soon additional instrumentation including a benthic crawler, a seismograph, a deep-sea Germanium gamma detector and a high-speed, single-photon video camera for bioluminescence studies will also be installed. Furthermore, the KM3NeT optical modules themselves provide invaluable data on deep-sea bioluminescence and bioacoustic monitoring of the local cetacean populations. A recent nice spinoff is the exciting possibility to use the optical fibres in the main electro-optical cables, that run for many tens of kilometre along the seafloor, for seismological studies via the technique of laser Distributed Acoustic Sensing (https://eartharxiv.org/ekrfy/).

We have now three major efforts in the world: KM3NeT and Lake Baikal with infrastructure located in countries belonging to APPEC, and IceCube at South Pole to which some European countries contribute. What are common activities? Do you think this cooperation could become a real network of detectors such as in the case for gravitational waves, namely LIGO and Virgo, who publish common papers?

In 2013, the Antares, IceCube, KM3NeT and Lake Baikal collaborations signed the Memorandum of Understanding for a Global Neutrino Network (GNN). This step formalised the already active cooperation between the different groups. Once infrastructures of similar scale are operational on the three continents, the stated aim of the GNN is a worldwide Global Neutrino Observatory. Within the framework of the GNN we have published a number of joint papers combining the data from ANTARES and IceCube resulting in improved limits on point sources and dark matter searches. A joint paper was also made on the follow up of the GW170817 gravitational wave alert. Furthermore, GNN organises yearly common meetings of the four collaborations and the biennual Very-Large Volume Neutrino Telescope conference (VLVnT). 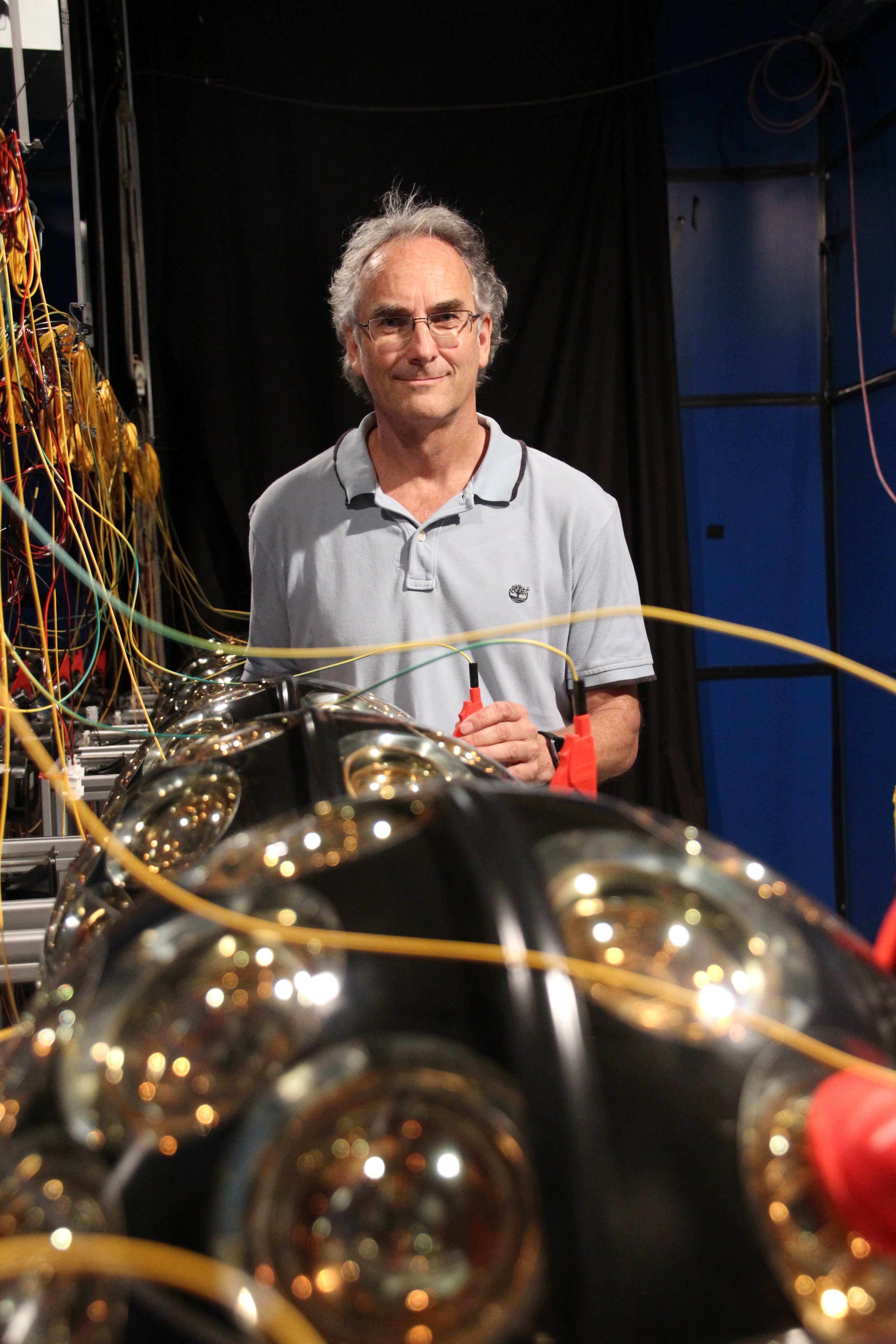 Dr. Paschal Coyle is a Director of Research, CNRS, at the Centre de Physique des Particules de Marseille (CPPM). Since 2000 he has been involved in the ANTARES deep-sea neutrino telescope and during 2008-2014 was the Spokesperson of the Collaboration. He was the Deputy Spokesperson of the KM3NeT Collaboration (2013-2016) and is currently the Physics and Software Manager of KM3NeT.