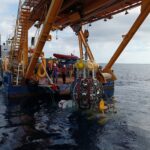 After a series of sea operations this year, the most recent of which was 29 June-1 July 2019, the KM3NeT/ORCA deep-sea neutrino detector is now continuously taking data with its first four neutrino detection units.

Located in the Mediterranean Sea at a depth of 2437 m and 40 km offshore from Toulon, France, the ORCA detector together with its sister ARCA, located offshore from Sicily, will allow the scientists of KM3NeT to study the fundamental properties of the neutrino elementary particle and perform neutrino astronomy.
During the sea operation, a detection unit (DU), wound like a ball of wool around its spherical deployment frame, is carefully lowered from a boat to its designated position on the seafloor. Using a remotely operated submersible, controlled from a second boat, the detection unit, still on its frame, is then connected to the junction box of the seafloor network. Once the electrical and optical connections to the shore station in La Seyne-sur-Mer are confirmed, the go ahead is given to trigger the unfurling of the detection unit to its full 200 m height. During this process, the deployment frame is released from its anchor and floats towards the surface while rotating. In doing so, the string unwinds, eventually leaving behind a vertical detection unit.
The KM3NeT design features multi-PMT optical modules each comprising 31 three-inch PMTs and each detection unit comprises 18 such optical modules. For ORCA, the detection units are spaced about 20 m from each other on the seafloor and the vertical spacing of the optical modules is about 9 m.
Almost immediately after power on, the trajectories of downgoing atmospheric muons, resulting from cosmic ray interactions above the detector, were reconstructed from the recorded light signals of the more than 2000 PMTs. 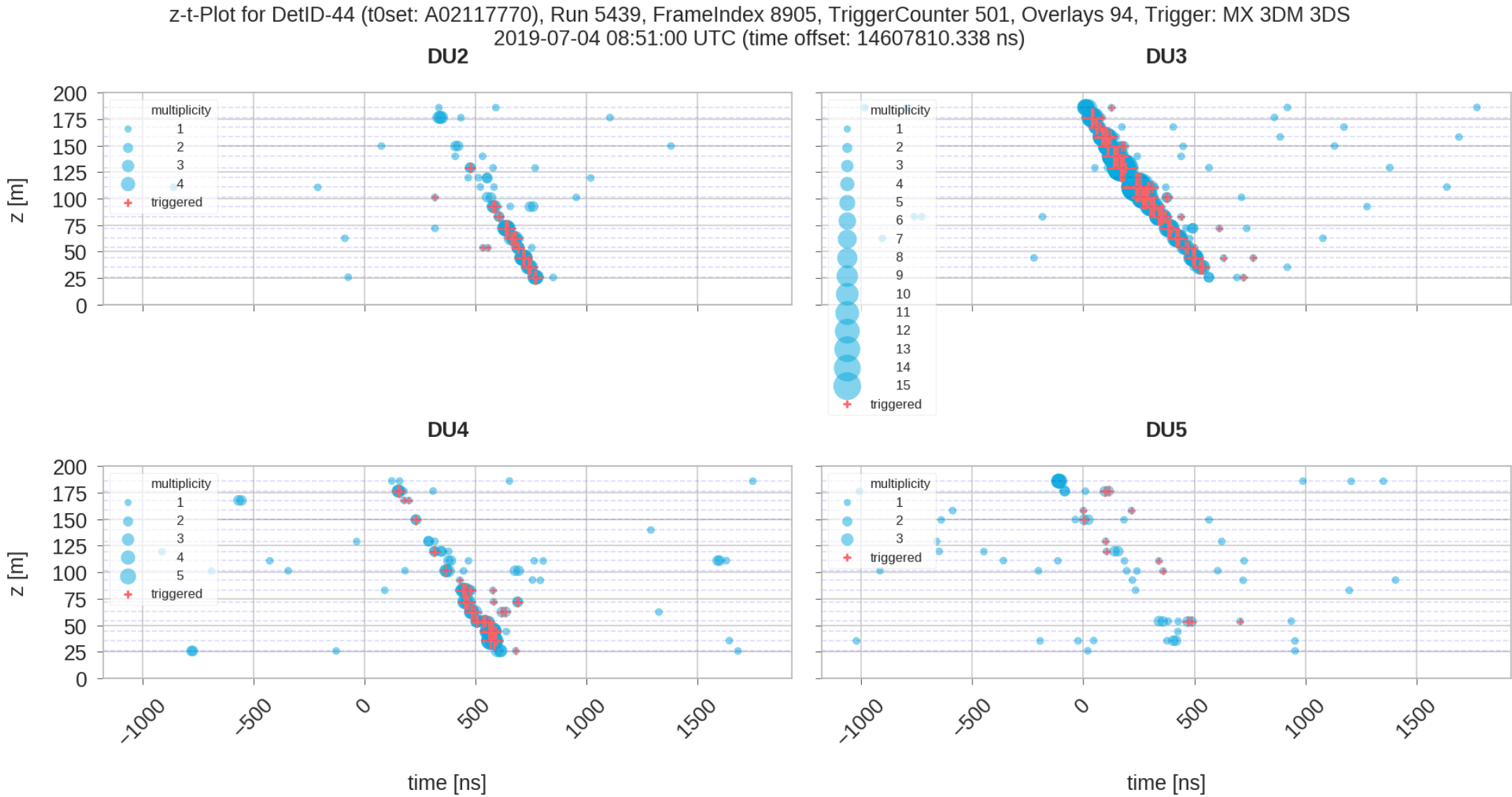 Online display of a downgoing muon event detected simultaneously by all four detection units. The height versus the time of the recorded light signals are shown separately for each of the detection units. The size of the circle indicates the number of PMTs giving a hit on that optical module.

A short video of the connection of the first detection unit can be viewed here : http://www.in2p3.cnrs.fr/fr/cnrsinfo/les-pecheurs-de-neutrinos-reportage-cnrs (french)
A more general video on cosmic neutrinos is available here: https://youtu.be/d_cJZEAOYy0 (english)

Further reading: Interview with Paschal Coyle on the recent deployment campaign for KM3NeT