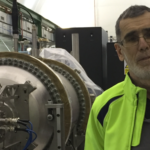 NEXT step to neutrino mass

Interview with Juan José Gómez Cadenas about the NEXT experiment

Recently, a committee working on neutrino less double beta decay, composed by Silvia Pascoli (Chair, Durham U.), Andrea Giuliani (CSNSM), Juan Jose Gomez-Cadenas (DIPC), Ezio Previtali (INFN, MI) Ruben Saakyan (UCL), Karoline Schaeffner (GSSI), Stefan Schoenert (TUM), was set in place in order do define a document describing the efforts towards a new generation of more sensitive detectors than the current existing, which will include a SWOT analysis and a critical evaluation of resources and possible schedules. This document, to be approved in the Scientific Committee of APPEC, will set the guidelines for funding agencies in the General Assembly to understand expected sensitivity of various technologies and scientific goals and reach of various techniques. A great effort is ongoing and one of them recently obtained an experimental success. Juan Jose Cadenas explains more on it.

What is your technical achievement and how does it compare to past existing ones?

NEXT is a high pressure xenon chamber with electroluminescent readout (HPXeEL). It exploits three features of gaseous xenon which are essential to suppress backgrounds in neutrino less double beta decay searches (ββ0ν): excellent energy resolution; the capability of reconstructing the event topology; the capability of identifying the Ba++ ion produced in the ββ0ν decay. The first phase of the experiment, the so-called NEXT-White detector, deploying 10 kg of xenon is currently operating at the Laboratorio Subterráneo de Canfranc (LSC), and the second phase, NEXT-100, with 100 kg of xenon is currently being assembled, with the plan of commissioning in 2020. We are also preparing a Conceptual Design Report (CDR) for a ton-scale detector.

With respect to the pioneer St. Gotthard TPC experiment, which operated at the St. Gotthard tunnel in the mid 1990’s, NEXT introduces two main innovations. The first one is the electroluminescent proportional amplification of the signal (EL), which results in a (measured) energy resolution of 0.5 % FWHM at Qbb (for point-like particles), and better than 1 % FWHM for long tracks (to be compared with 7 % FWHM at Qbb achieved by the St. Gotthard TPC). NEXT is currently the only high-resolution xenon experiment searching for ββ0ν. Furthermore, it is possible to operate NEXT with pure xenon, since no quenching of the ionisation is needed (as was the case for the St. Gotthard TPC), and therefore the scintillation signal is preserved, providing the start-of-the-event and thus the needed fiducialization in Z.

Furthermore, the NEXT collaboration has recently published a proof-of-concept that shows the possibility to capture and identify the Ba++ ion produced in the ββ0ν decay using the so-called SMFI (Single Molecule Fluorescence Imaging) technique. SMFI was invented by physicists and then applied with great success to biological problems. In 2015, Dave Nygren, co-spokesperson of NEXT proposed to use SMFI to tag the presence of the Ba++ ion. In 2017 we published a PRL showing that it is possible to follow the trajectory of single fluorescent molecules chelated with a Ba++ ion, thus opening up the possibility of developing such detection system in NEXT.

Last but not least, NEXT has been developed through a set of carefully planned stages, involving 1-10-100 kg detectors, in order to master the technical details which will allow the extrapolation of the technology to ton-scale detectors.

What is the relevance of your measurements on enriched Xe and what measurements will be particularly improved thanks to it?

Our current run with enriched xenon has two goals. We aim to measure the ββ2ν mode lifetime, which in addition to provide another measurement of this important quantity (there are previous measurements by KamLAND-Zen and EXO), will allow us to quantify with great detail the rejection power of the topological signature. Furthermore, the enriched xenon run will allow us a full characterization of the background budget of the detector.

What is the impact this will have in NEXT and neutrinoless double beta decay?

NEXT is the only high-energy resolution experiment based in xenon. Furthermore, the identification of the two electrons results in a very low background rate in the region of interest (ROI). If we can implement Ba++ tagging, NEXT could evolve into a truly background-free experiment. This is a must to explore very long lifetimes, and thus exploring the inverse and eventually the normal hierarchy.

Are underground laboratories in Europe a great resource and how do you see that they will evolve in next years?

Yes, they are, and Europe science is benefiting immensely from these facilities, with leading experiments in ββ0ν, dark matter and other underground physics areas. I would like to see European underground labs evolving toward a tight network that would permit an intense cooperation in underground science in Europe. Indeed, I believe that this network can be expanded at the truly international level. In the case of NEXT one could very well imagine that such underground lab network would permit the operation of several modules in the range of 500–1000 kg at LSC and LNGS, and possibly in SNOWLAB. It is important to remark that our experiments are run by international collaborations, and the creation of an international network of laboratories could permit far-ahead planning and optimisation of resources. As we are moving into very large and complex apparatus in rare searches, this international network of labs appears essential.

Juan José Gómez Cadenas is an Ikerbasque professor of physics at the Donostia International Physics Center. He has worked in neutrino physics for the last 25 years, contributing to experiments such as NOMAD, K2K and T2K. In 2008 he proposed the NEXT experiment to the LSC. He is the co-spokesperson of NEXT, together with Dave Nygren, inventor of the Time Projection Chamber.