Strategy for the future of neutrinoless double beta decay

Written by katrinlink on 26th July 2019. Posted in 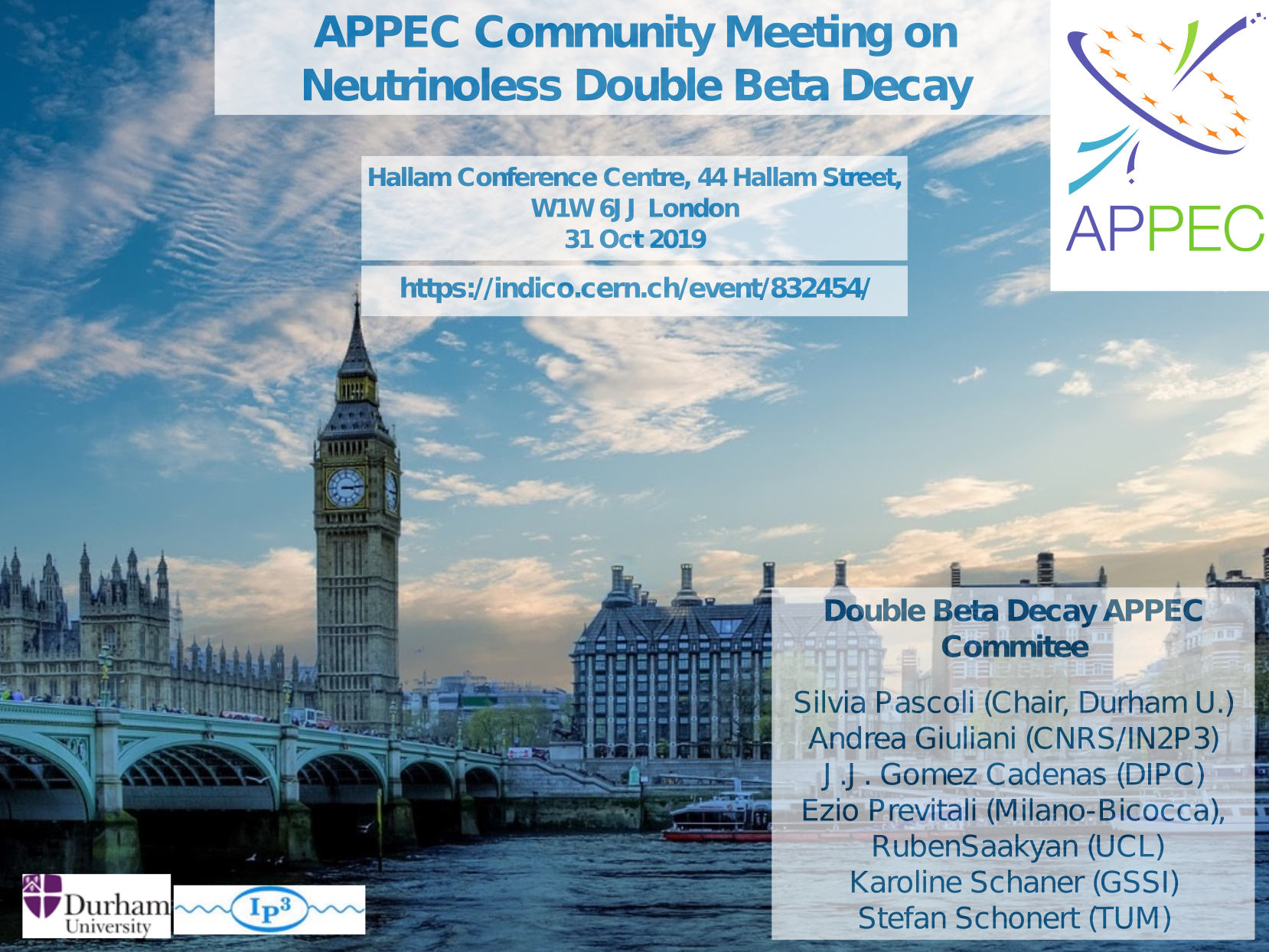 One of the recommendations on the neutrinos in the APPEC Roadmap sounds:
‘APPEC strongly supports the present range of direct neutrino-mass measurements and searches for neutrinoless double-beta decay. Guided by the results of experiments currently in operation and in consultation with its global partners, APPEC intends to converge on a roadmap for the next generation of experiments into neutrino mass and nature by 2020.’
Currently, APPEC aims to implement this recommendation. The adopted strategy for the future of neutrinoless double beta decay is the nomination of a panel, following the proposition by the SAC of a mandate document highlighting the panel duties, which was approved by the General Assembly in Granada on May 16, 2019.
The panel, is chaired by Prof. Silvia Pascoli (Durham U., UK) and it is composed by Andrea Giuliani (CNRS/IN2P3, France), J.J. Gomez Cadenas (DIPC, Spain), Ezio Previtali (Milano-Bicocca, Italy), Ruben Saakyan (UCL, UK), Karoline Schaner (GSSI, Italy) and Stefan Schönert (TUM, Germany). It is in charge of writing a document with a critical analysis on the technologies that Europe could pursue for establishing the new generation of neutrinoless double beta decay.
This document will be discussed and endorsed by the APPEC SAC until the APPEC Community Meeting on Neutrinoless Double Beta Decay in London, on October 31. There the inputs from the scientific community will be collected. Once the community comments are received and the document is updated, it will be discussed and approved by the APPEC SAC and General Assembly. The document will then be used in international fora to represent the Community view.

We briefly examine with Silvia the aim of the document and the meeting in London:
Silvia, you have provided an excellent service work to the community together with the panel by writing the 0νββ specific roadmap document and organising the APPEC Community meeting.

What scientific goal you see in the reach for the next 10 years?

Which are according to you the major challenges that the 0νββ will have to face in this decade?

Neutrinoless double beta decay is an exceedingly rare process. The main challenges we face are the reduction of backgrounds to unprecedented levels and at the same time increasing the masses to the ton-scale. The community has devised new experimental ways to address this challenges and it is now the time to put them at work.

What theoretical and R&D efforts should we concentrate on to prepare for the successive decade?

From the knowledge of neutrino masses we have, we know that the predictions for the decay rates could be longer than the reach of the next generation of experiments, in particular if neutrino have a normal ordering of masses. This means that 10-ton scale experiments are needed with even further reduced backgrounds, ideally background-free, and excellent energy resolution. There are some preliminary ideas on how this could be achieved but substantial R&D is needed to turn these ideas into real experiments. On the theoretical side, an important aspect we need to make significant progress on is the computation on the nuclear matrix elements. New techniques are becoming available and we may be on the verge of a breakthrough. The collaboration with the nuclear theory community is essential for this purpose.

What do you hope for this community meeting?

Following a long tradition, Europe is playing a leading role in neutrinoless double beta decay with experiments such as GERDA, CUORE and NEXT. It is essential that this leadership continues in the future. It is an opportunity that we should not miss. To this aim, strong support is needed for this field, focusing on the most sensitive and most promising experiments. At the community meeting we plan to discuss the options for the next generation and to consolidate the wishes of the community for a strong European programme.

Silvia Pascoli is professor at Durham University. After getting her ‘laurea” in theoretical physics at the University of Trieste under the supervision of Antonio Masiero, she obtained her PhD at SISSA (Trieste, Italy) studying the properties of neutrinos with Serguey Petcov. She then moved to UCLA for her postdoc and then at CERN. Since 2005 she is at Durham University where she continues to work on neutrino physics, in all relevant areas, Theory, Phenomenology, Astroparticle Physics and more recently Cosmology. In 2016 she was awarded a Wolfson Research Merit Award by the Royal Society.