Meeting of the APPEC General Assembly

Written by katrinlink on 17th December 2020. Posted in 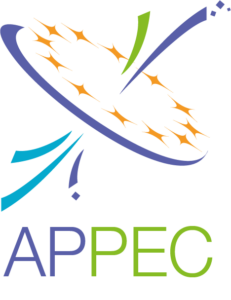 On 9 December, the APPEC General Assembly came together for an online Meeting. The meeting was opened by a welcome from the APPEC Chair Teresa Montaruli and the General Secretary Job de Kleuver.

The first topic was on Neutrinoless Double Beta Decay, as follow-up of the sub-committee report, and how to develop a common strategy for future experiments, not only within Europe but also globally. Montaruli reported from a meeting with interested funding agencies from several European countries. But since coordination between North America and Europe seems to be necessary and a global approach is desired we aim for a European-North  American  Summit  to  achieve collectively a  global  investment  strategy  for  the  achievement  of  at  least  2  projects  for  the 10-20 meV reach. A joint resolution document, signed by Funding Agencies, should be developed.

Then the approach towards a more sustainable APPEC was discussed. Supported by the current situation, in which we have all learned to work together online, the idea of a distributed workforce is to be implemented. The most active APPEC partners agreed to indicate dedicated people for such a distributed workforce, initially as in-kind contribution. The new General Secretary should then implement  a  more  detailed division  of  tasks  and  lead  the  renewed APPEC Workforce and should also prepare a renewed funding model for discussion in the next year. 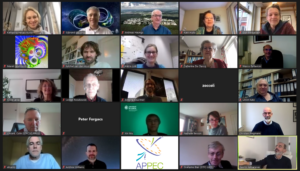 After a short break the SAC Chair Sijbrand de Jong reported from the last SAC-meeting. one of the two main topics was on the Direct Dark Matter Detection sub-committee. An online Community feedback meeting to discuss the draft report with all stakeholders (in the wider APP community) is planned for 2 February 2021, further information is available here. After implementing the community feedback, a final report should be ready in March 2021 for approval by the General Assembly.
De Jong additionally reported on the other main topic, the status of the mid-term review of the APPEC Roadmap, which will serve as a basis for discussion at the planned APPEC Town Meeting.

This was a fitting lead in to the planning status of this very Town Meeting, which was the next agenda item. Since it was agreed that the Town Meeting should be held on site in Berlin, it was agreed to postpone it until early 2022. A  more detailed planning for the Town Meeting preparations, including the option for input from national APP communities, will be discussed in a next General Assembly meeting.

The last topic before the lunch break was then the election of a new APPEC Chair and a new General Secretary (GS). Out of the three candidates available for the Chairperson, Andreas Haungs was elected as the new Chair for a fixed term of two years and Katharina Henjes-Kunst was appointed as the new GS for a first term of two years. The General Assembly thanked former Chair Teresa Montaruli and Co-Chair Christian Stegmann for their work in the last two years and highly appreciated the supportive work of former GS Job de Kleuver. The new Chair and GS were congratulated on their election and all look forward to continuing to work in good cooperation.

The next agenda item was a report from the Joint Secretary on the actions since the last meeting, including a status report on the APPEC Technology Forum (which is postponed until autumn 2021), on Communications and Outreach, common fund payments and the budget and meetings plan for 2020/2021.

Finally a report of joint ECFA-NuPECC-APPEC activities was given by Teresa Montaruli. Further information on these common activities are also available from this website http://nupecc.org/jenaa/ and were presented in an article in the last APPEC newsletter: Joint ECFA-NuPECC-APPEC activities
This agenda item was concluded by a report from the two chairs, Marek Lewitowicz from NuPECC and Jorgen d’Hondt from ECFA about their respective Consortia/ Committee.

As this was the last agenda item, Teresa Montaruli and Job de Kleuver closed the meeting with the best wishes for the coming holidays.